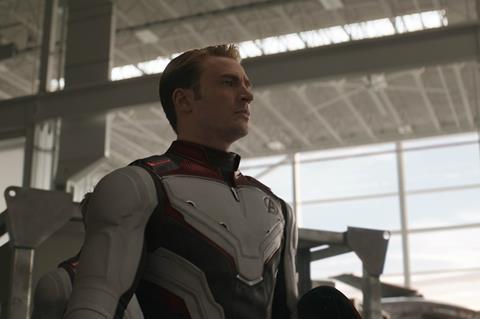 The records keep tumbling for Avengers: Endgame in its second weekend as it crossed $2bn worldwide in a best-ever 11 days on Saturday (4) to became the second highest global release in history behind Avatar.

The 22nd release in the Marvel Cinematic Universe added a confirmed $284.8m internationally for $1.573bn to rank as the second highest release of all time behind Avatar on $2.028bn, and ranks number one everywhere except Japan. From Friday to Sunday it dropped approximately 55% against the opening weekend, and by region stands at approximately $966m in Asia-Pacific, approximately $400m in Europe, and roughly $200m in Latin America.

China remains the lead market by far on $576m (RMB 3.88bn) and is the highest non-local release ever, and the third highest release behind Wolf Warrior 2 and The Wandering Earth.

Turning to IMAX, Endgame grossed $36.7m to reach $170m worldwide and overtake Infinity War to become the third highest release after 12 days of release. The international gross stands at $120.8m and surpassed Avatar to become the highest of all time. In North America, Endgame earned $12.1m for $49m. The China haul is $72m and ranks as the highest ever. Endgame shot entirely with IMAX cameras.

Wonder Park grossed $4.7m from 44 markets to bring the family animation to a $66.7m running total. Horror release Pet Sematary, based on the Stephen King novel, added $1.5m from 37 markets for $51.9m. Brazil and Italy are the final markets to open this week.

The UK delivered the top result of the session on $1.1m to rank second behind Avengers: Endgame, followed by Mexico on $610,000 for fourth place, and Australia $595,000 for third place. The international roll-out will continue throughout the summer, and the next major markets to release are France on May 15, Spain on May 17, Brazil and Germany on June 20, Russia on June 27, and South Korea on July 17.