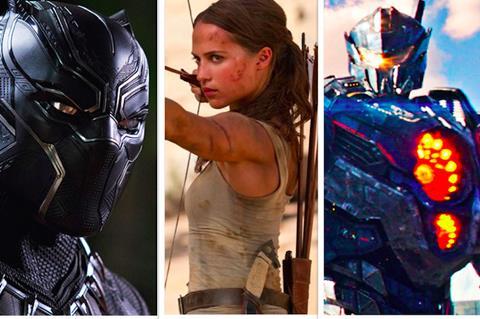 MARCH 23 UPDATE: Black Panther became the 14th highest global release in history as it crossed $1.2bn this week (March 21) and hit $100m in China to propel Disney past $1bn in international receipts for the year-to-date.

The Marvel Studios release has been Hollywood’s box office sensation of 2018 so far – although its days atop the box office are over. Last week it ceded the crown to MGM/Warner Bros’ Tomb Raider, which faces Legendary Entertainment’s Pacific Rim Uprising in what will be a battle royal this weekend.

The Alicia Vikander action adventure has raced to an early $132.5m via Warner Bros Pictures International and swings into Japan this weekend. The market could yield rewards, given that audiences took to Angelina Jolie in the 2001 original Tomb Raider: Lara Croft, which finished on $21.4m (inflation-adjusted to $29.9m), and its 2003 sequel Lara Croft Tomb Raider: The Cradle Of Life, which opened there on $4.5m ($6.1m) en route to $15.9m ($21.4m).

Yet the thrill-seeking heiress must compete with John Boyega in Pacific Rim Uprising, the sci-fi sequel to Guillermo del Toro’s 2013 tentpole that grossed $411m worldwide – $309m of which came from international markets.

China was the original’s highest grossing market on $111.9m and big things are expected when the sequel debuts there. A lot will be riding on it, too – Wanda owns Legendary Entertainment.

Pixar’s Coco has grossed a little over $554m, while Ava DuVernay’s fantasy adaptation A Wrinkle In Time has climbed to slightly more than $11.8m and will get a boost with the UK debut.

Sony Pictures Releasing International’s Peter Rabbit is getting some real momentum behind it and stands at $49.3m internationally, having recently crossed $100m in North America. Good business is expected to continue this weekend when the family release opens in Australia, Germany, Italy, Spain, Brazil, and Russia.