Disney’s Marvel superheroes were too strong for the rest of the pack in the second weekend of release as Captain America: Civil War added an estimated $72.6m to surge to $295.9m. 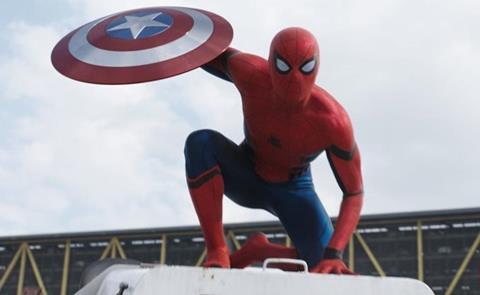 Disney stablemate The Jungle Book has already crossed $300m and in its fifth session brought in a further $17.8m as the running total climbed to $311.8m.

Sony’s drama Money Monster starring George Clooney, Jack O’Connell and Julia Roberts premiered out of competition in Cannes last week and arrived at number three via the TriStar label on $15m from 3,104 theatres.

The Darkness opened through High Top Releasing in fourth place on $5.2m in 1,755 venues.

Yorgos Lanthimos’ film will continue to expand and go wide on May 27. The bizarre sci-fi drama premiered in Cannes last year when Alchemy acquired rights.

A24 took The Lobster from the troubled company recently and followed that up by acquiring US rights in Cannes last week to Lanthimos’ upcoming The Killing Of A Sacred Deer.

This week’s wide releases are Cannes out of competition premiere The Nice Guys through Warner Bros; The Angry Birds Movie through Sony; and Neighbors 2: Sorority Rising via Universal.