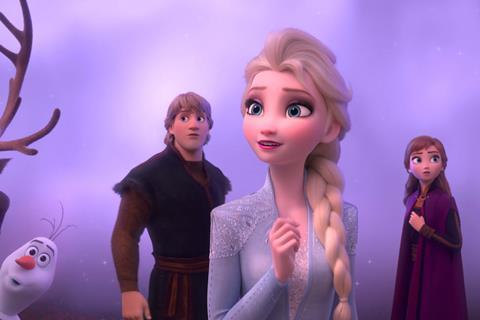 DECEMBER 9 UPDATE: With Star Wars: The Rise Of Skywalker still to come, Disney’s combined releases so far in 2019 crossed $10bn at the global box office on Sunday (8).

The weekend’s estimated results for Frozen 2 took global box office for The Walt Disney Studios for the year past the worldwide milestone, comprising approximately $6.72bn from international markets and $3.28bn in North America.

Next weekend Frozen 2 will become the sixth Disney release in 2019 to cross $1bn at the worldwide box office after Captain Marvel, Avengers: Endgame, Aladdin, Toy Story 4, and The Lion King.

Adding in results for Fox films this year takes the tally to $11.94bn ($8.14bn international / $3.8bn North America). Disney set the previous record for global box office in a calendar year in 2016 when its releases delivered $7.6bn.

Sony’s Jumanji: The Next Level arrived on $52.8m in its first international wave, while Lionsgate International executives reported that Knives Out has reached approximately $124.1m at the global box office.

UPDATED: The extraordinary result for Disney came at the end of a third consecutive weekend of dominance for Frozen 2. The family smash added an estimated $124.9m to reach $919.7m and become the eighth highest release of the year to date, and the 13th highest animated release in history as it prepares to overtake Shrek 2 on $923m any day now.

There is a new Imax global record for biggest animated film as $2.7m over the weekend raised the global running total to $38.6m.

UPDATED: Jumanji: The Next Level erupted on to the scene with a $52.8m international debut that secured number one ranks in 16 out of its initial 18 markets in Europe and Asia. China led the way on a lacklustre $24.9m.

Taiwan produced $2.4m, and the Southeast Asia region delivered $14.2m for more than a 47% gain on the 2017 release and opening top in three out of four markets. Jumanji: The Next Level scored the second highest release of all time in Malaysia on $4.6m for Sony’s highest debut in the market. Indonesia generated $6.4m for the second highest debut for a December release, and Singapore and Philippines produced opened to $1.7m and $1.4m, respectively.

UPDATED: Knives Out has reached $124.9m at the global box office after 12 days, as the international weekend delivered $19.4m from 67 markets for a $61.3m running total.

South Korea was the top debut market for the all-star whodunnit ensemble on $1.7m in third place, while debuts in Italy and Mexico produced $1.3m in third and $1.1m in second, respectively. China remains the top market on $23.7m after 10 days.

The Thrombeys have reached $7.8m in the UK, where they ranked third on a 20% drop, and stand at $3.9m in Australia after a 2% decline. Knives Out grew three percent in Spain and has reached $2.1m after two weekends. It opens in six new markets including Brazil this week.

UPDATED: Emilia Clarke and Henry Golding rom-com Last Christmas used an $11.4m session to propel the international running total to $52m from 63 territories, and $85.5m worldwide. It opened in Russia in third place on $1.5m, South Korea in fifth on $1m, and Mexico in second on $872,000. The UK delivered the weekend’s top holdover business on $1.7m for $16.1m after four sessions.

The Addams Family grossed $4.5m from Universal territories to vault to $73m, and $88.7m through all distributors. The global tally stands at $185.2m. The animation debuted in France in third place on $1.9m, and Australia in third on $847,000. DreamWorks Animation and Pearl Studio’s Abominable has reached $101m through Universal territories, rising to $116.2m including China via Pearl Studio, and $176.5m worldwide. Local Italian crime drama L’Immortale, made in partnership with SKY Vision and based on a TV series, opened in Italy this weekend on a superb $3.1m.