The Hobbit: The Battle Of The Five Armies soars past $500m at international box office

UPDATED JANUARY 5: The Hobbit: The Battle Of The Five Armies brought in a confirmed $52.5m over the weekend from 65 markets to reach $504.7m. 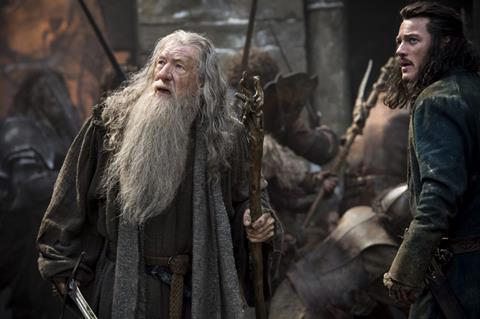 UPDATED: The New Line-MGM fantasy finale scored the biggest Warner Bros launch of all time in Argentina on $2.1m (Ps 18.1m) from 397 screens to rank top and claim 56% of total market share.

It has reached $69.2m in Germany and stayed top for the fourth consecutive weekend and stands at $57.3m in the UK after four, where it has also stayed top for its entire run.

The film is set to open in China on January 23.

American Sniper finished its opening weekend in Italy on a mighty $7.1m from 425 screens for second place behind Si Accettano Miracoli. It has become Clint Eastwood’s biggest debut and Warner Bros’ second biggest opening weekend for a non-franchise title behind I Am Legend. It opens in the UK on January 16 and Australia on January 22.

Night At The Museum: Secret Of The Tomb took $26.2m from 61 markets to stand at $92.9m. Mexico produced $3.9m for a number one hold in the second weekend that raised the tally to $11.5m, while Brazil delivered $3.1m in the opening weekend for second place.

The UK produced $2.7m for $15.2m after three weekends and Australia $2.1m for $6.9m after two. Germany delivered $1.7m for $7.3m after three. In a pair of number one launches, Secret Of The Tomb arrived in Colombia and Peru on $1.2m and $1.m, respectively. The Colombia result was Fox’s sixth biggest debut.

Taken 3 ventured into its first two international markets on $9.3m overall, grossing an impressive $8.1m in South Korea for a Liam Neeson record and $1.3m for number one in Hong Kong.

Fox International Productions’ Yolki 1914: Tsar Christmas earned $2.4m from 1,100 screens in Russia in its second session to boost the tally to $5.3m.

With a 58% international footprint there is plenty of time to go on the animation, which has generated $378.7m worldwide including $211.3m from North America.

Into The Woods opened in Slovenia, Hungary, Greece, Portugal and South Africa this weekend and took $1m to reach $5.8m. The musical has grossed $2.3m in South Korea and $1.4m in Russia. The UK and Australia open this week.

Disney-owned UTV’s fantasy comedy PK starring Aamir Khan is the biggest release of all time in India after adding $8.6m for $65.2m and ranks as the top Bollywood release in Australia on $1.9m and the US on $9m for an $86.2m global tally.

UPDATED: Legendary’s Seventh Son, which Universal is distributing worldwide, grossed $18.4m from 24 territories to reach an early $21.7m way ahead of the scheduled February 6 release in North America.

The action fantasy opened top in Russia on $8.6m and is expected to play strongly through the national holidays that run until January 11. It also opened top in the Ukraine on $697,000 for Universal’s biggest ever launch.

Seventh Son opened in Spain in fifth place on $1.2m and studio executives noted a string of decent debuts in Hong Kong, Norway, Peru, Portugal and Taiwan that they said met or exceeded expectations.

The international pattern rolls out over the next few months including nine territories next weekend.

The Theory Of Everything added $7m from nine territories as the tally climbed to $12.2m, fuelled by a superb $5.7m number one launch in the UK that beat Five Armies and opened on a par with The Wolf Of Wall Street and War Horse.

This was Working Title’s seventh biggest debut in the territory. Germany delivered $881,000 for $2.2m in the second session.

Russell Crowe’s drama The Water Diviner took $2.3m in its second weekend in Australia and New Zealand to reach $7.2m. Australia generated $2.2m for $6.8m of that total. Universal holds distribution rights for 11 European markets while Mister Smith licensed the rest of the world.

Angelina Jolie’s wartime survival story Unbroken is in the early stages and took $2.4m from 11 to raise the running total to $6.9m.

Dumb And Dumber To, which Universal is distributing in seven territories, grossed $1.2m from five for $17.8m. Gloria, about the controversial Mexican singer Gloria Trevi, opened in Mexico in fifth place on $1.3m in 662 sites.

Paddington has crossed $100m internationally as it reached a confirmed $105.4m ahead of its release in the US on Jan 16. The UK has provided almost half of the tally at $47m, with the next two highest grossing territories France ($18.9m) and Germany ($11.4m).

The Imitation Game stands at $22m.

The Imitation Game ventured into six new territories this weekend and generated more than $7.4m overall as the early international running total leapt to $32.9m.

The worldwide tally including $30.8m from North America via TWC has soared to more than $63.7m.

Venus In Fur has grossed $7.4m and is nearing the end of its run.

Annie grossed $4.2m in 21 territories, propelling the international running total to $16.9m. SPRI’s total is $12.8m and Village Roadshow is responsible for the $4.1m balance.

The UK delivered $2.3m in its second session for $8.6m. The Netherlands has generated $1.4m and Belgium $740,000 after the same period. Annie has amassed $3.6m after three weekends in Australia through Village roadshow.