UPDATED JUNE 29: Jurassic World stayed top of the global food chain for the third consecutive session as a confirmed $84.3m from 66 territories propelled the international tally to $745.5m and combined with a confirmed $500.4m in North America for $1.246bn worldwide. 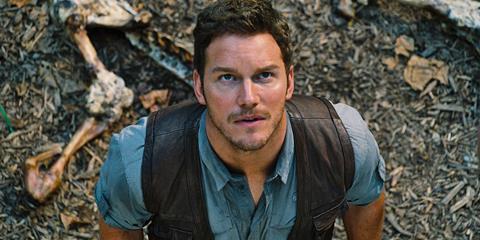 UPDATE: With the $800m international milestone surely only several away, Universal Pictures International (UPI) executives said the adventure surged to $203.9m in China, where the adventure film has generated a little less than one-sixth of worldwide ticket sales to date.

The animation opened top in the UK on $18.1m from 573 sites, which UPI executives reported on Monday to be the biggest three-day animaton launch in history and the widest release for an animated feature.

Minions also opened top in Brazil on $7m from 550 for the biggest animation launch of all time. There were two more impressive debuts in Poland and the Czech Republic, taking $2.4m from 215 and $1.4m from 211, respectively.

The family release arrived in New Zealand at number one on $726,000 from 130 and followed up last weekend’s record-breaking Australian debut with $3m from 279 in third place for $8.7m. The second session in Malaysia generated an estimated $1.1m from 121 for $3.8m.

This week brings 15 debuts, among them Germany, Spain, Argentina, the Netherlands and Austria.

In a quartet of number two launches the R-rated comedy sequel starring Mark Wahlberg, Amanda Seyfried and the voice of MacFarlane produced a $3.7m number two debut in Germany from 653 venues, $3.5m in Russia from 1,088, $3.3m in Australia from 265 for second place and $1.9m in Taiwan from 84.

Disney-Pixar’s Inside Out added $26.4m from 42 territories to reach an early $81.5m from the typical staggered release pattern for Pixar fare.

India registered the second largest debut for a Disney-Pixar film on approximately $400,000. Inside Out arrives in South Korea on July 9, Spain on July 17, Japan on July 18 and the UK on July 24.

Avengers: Age Of Ultron has amassed $919.1m internationally and $1.372bn worldwide and touches down in its final market of Japan this week. Tomorrowland stands at $111.9m and $202m worldwide.

UPDATE: San Andreas grossed a confirmed $10.7m from 4,773 screens in 69 markets to boost the tally to $299.2m. Roughly $71.2m has come from Latin America, where the film ranks as Warner Bros’ biggest release in Mexico, Chile, Colombia, Peru and Venezuela.

UPDATE: Terminator: Genisys stormed into 10 territories ahead of this week’s North American launch and generated $8.4m from 1,525 locations.

There was a notable number one debut in Singapore on $1.4m from 84 sites that saw the sci-fi action release start approximately 26% ahead of Terminator: Salvation – the last entry in the series in 2009 – and score a record for the franchise and Arnold Schwarzenegger.

Colombia generated $1.3m at number one from 168 for the same pair of records and a 201% improvement on Terminator: Salvation.

Genisys gets a big push into a further 34 territories this week including the UK, Australia, Russia, France, Mexico and Brazil, followed the week after by Germany, Italy, Spain and Japan.