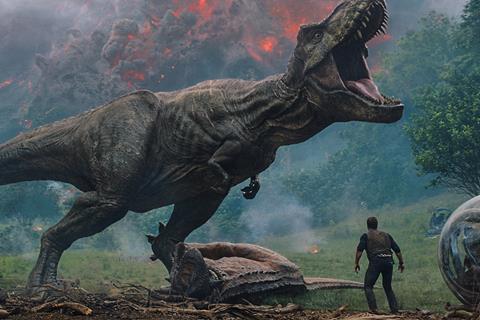 JUNE 25 UPDATE: Jurassic World: Fallen Kingdom remained top of the international pile and came in above weekend estimates by some $5m, adding $111.9m for $567m as the film surged past $200m in China.

Universal Pictures International sources said Jurassic World: Fallen Kingdom opened at number one in 16 of its 17 new markets. Mexico led the way on $12.2m for the third highest June debut and Universal’s fifth highest opening weekend in history, followed by Brazil on $9.3m for the industry’s eighth highest opening weekend, and Australia on $8.2m in Universal’s widest ever release in 304 locations, and the studio’s fourth highest weekend debut.

IMAX sites generated $19m worldwide for a $46m running total. Some $4.3m of the weekend IMAX haul came from the international arena and $4.2m from China.  Approximately 53% of all global ticket sales for Jurassic World: Fallen Kingdom have come from the 3D format. Some $380m has been generated by total 3D ticket sales, of which $105m come from RealD ticket sales.

UPDATED: Pixar’s Incredibles 2 brought in $56.7m from 28 territories as the running total climbed to an early $134.6m and $485m worldwide. The China debut delivered a record Pixar opening on $21m, far exceeding the original which finished on less than $3m after it opened in January 2005.

An estimated $3.3m from India secured top spot and the highest industry animated opening weekend result and the family hit has already grossed more than any Pixar release before it.

UPDATED: Ocean’s 8 took $27.6m from 60 markets on approximately and climbed to $71.3m as the worldwide haul reached $171.6m. The all-female heist caper debuted at number one in the UK on $5.8m including previews, and opened top in Russia on $2.6m.

The comedy Tag grossed $1.2m from nine markets for an early $3.2m running total. Australia leads the way on $1.6m. Comedy Life Of The Party stands at $10m.

Horror smash A Quiet Place grossed $1.7m from 17 markets including France, where it opened in second place on $1.6m. The international haul stands at $141.4m.

Family animation Sherlock Gnomes has reached $44.3m, and stands at $11.1m in the UK after seven weekends.