Universal and Legendary’s juggernaut will become the fastest film in history to reach the milestone on Monday, its 13th day in release. 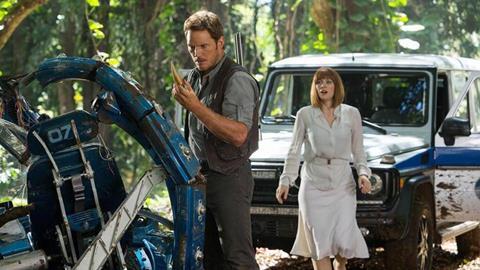 Jurassic World will take its place alongside Fast & Furious 7 as Universal’s second film of the year-to-date to cross $1bn at the global box.

Studio chiefs also confirmed that the weekend’s $106.6m North American haul set a new record as the biggest second-weekend session of all time.

In another new high-water mark the film crossed $500m internationally on Saturday in a record 11 days en route to a $584.4m running total.

As of Monday morning that figure combined with $402.8m from North America for a $987.2m global running total.

Universal and Legendary’s Jurassic World continued to dominate the globe with two record second-weekend sessions internationally and in North America.

The film will this week pass the $640m lifetime total of Jurassic Park including first-run, re-issues and 3D to become the biggest in the franchise.

The adventure is the last territory to go and will open in Japan on August 5.

Imax generated $22.1m worldwide from 809 venues for $84m to cross $80m in a record 12 days that supplanted the previous 23-day speed record set by Avatar.

The Despicable Me spin-off scored the biggest opening weekend of all time for an animated film in Malaysia and the second biggest animated debut in Singapore behind Kung Fu Panda 2.

This week the family release arrives in the UK, Brazil and Poland among others.

There are 13 territories to go including Chile this week.

The R15-rated action reboot opened in first place in Japan ahead of local release Love Live on $2.1m from more than 660 screens.

The Divergent Series: Insurgent used an $11.7m China debut on the cusp of the annual blackout blockade of Hollywood releases for several weeks to push the film past $290m and the $289m lifetime total of predecessor Divergent.

The film opened at number three in Mexico on a terrific $3.4m from 713 and scored Fox’s sixth biggest number one debut in Peru on $1.2m from 195. The studio earned its sixth biggest opening weekend in Ecuador, where the film placed second on $476,000.

The horror debuted at number five in Argentina on $345,000 from 80, roughly 69% ahead of the previous episode.

Local Spanish rom-com Ahora O Nunca (Now Or Never) arrived in second place in Spain on a confirmed $1.8m from 428 to rank as the best debut of the year-to-date for a local title.