JUNE 15 UPDATE: An exceptional year for Universal Pictures vaulted to another level as the latest episode in the tentpole Steven Spielberg created 22 years ago set opening weekend records in North America, international and worldwide. 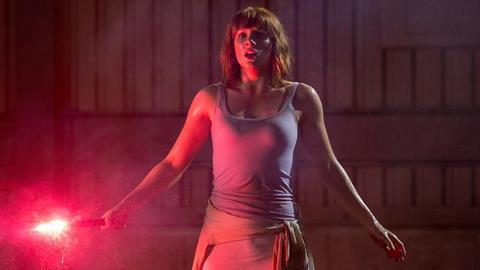 The overall global debut of $524.1m is by far the biggest ever as prior to this no film had ever grossed more than $500m within a single weekend.

RealD announced that approximately 65% of the international roll-out was on 3D-equipped screens and that 3D ticket sales drove $205m of box office. RealD said ticket sales for screens where it had licensed its 3D cinema technology accounted for $70m.

“An event film like Jurassic World is made even more memorable when it’s experienced in 3D,” said Anthony Marcoly, president of worldwide cinema at RealD. “We congratuale our friends at Universal Pictures, Amblin Entertainment, Legendary Films and our exhibition partners all around the world.”

On Sunday the studio reported that Jurassic World, directed by Colin Trevorrow and featuring Spielberg as executive producer alongside Thomas Tull of co-financier Legendary, took an estimated $307.2m from 66 markets to deliver the industry’s second highest international debut behind Harry Potter And The Deathly Hallows: Part 2’s $314m in 2011.

It has become customary for China to lead the way in the territory roster, however that should not diminish the sense of awe its film-going public and the infrastructure that caters to the local audience continues to inspire.

A confirmed $100.1m from the first five days equates to a little less than one-fifth of the film’s entire global weekend. This was Universal’s biggest debut in China

Jurassic World overtook the $250.4m scored earlier this year by Fast & Furious 7 to register Universal’s highest international weekend. Studio executives reported that despite hot weather across much of Europe, the film claimed on average 70% market share around the globe.

UPI executives said 3D generated approximately 50% of international box office. Japan is the last remaining territory to go and the film will open there on August 5.

The studio announced on Monday that Pitch Perfect 3 has been scheduled to open on July 21 2017 and will once again star Anna Kendrick and Rebel Wilson.

The film ranks is now the studio’s fourth biggest release and ranks second in China after 5,140 screens generated $23.3m over days and propelled the tally to $80.5m.

The disaster film ranks as the third biggest Warner Bros release in Mexico after $2.34m from 1,550 screens pushed the running total to $26.2m.

Entourage pulled in $1.6m on more than 791 screens in Australia and other markets for an early $5.8m. The small screen adaptation stands at $4.5m in Australia.

The Melissa McCarthy action comedy added $2.3m in the UK for $8.5m and climbed to $16.2m in South Korea, where it grossed $1.1m for the session and has overtaken the lifetime totals of every James Bond and Jason Bourne release.

Hamari Adhuri Kahaani from Fox International Productions earned $4.2m from 1,313 screens in seven markets. India was the main highlight as the film opened top on $3.6m from 1,200.

The horror instalment took $1m in Russia for $5m after two weekends and has amassed $3m in the Philippines and $2.8m in Malaysia after the same period.