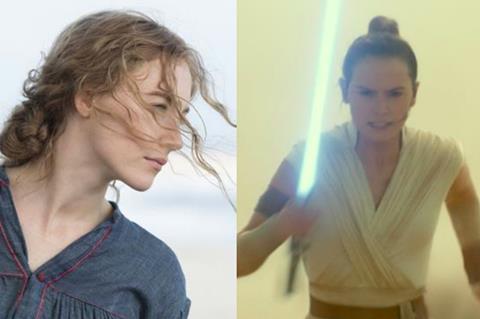 Major hits with women in the lead continued to impress at the box office as Sony’s Little Women crossed $100m worldwide over the weekend and Lucasfilm’s Star Wars: The Rise Of Skywalker climbed to within easy reach of the $1bn global box office milestone.

DreamWorks/Universal/Amblin Partners’ 1917 earned the most for the weekend on $56.4m worldwide and debuted in the UK on $9.5m via eOne. Universal family adventure Dolittle starring Robert Downey Jr kicked off with $6.8m in South Korea, while thriller Underwater took $14.1m globally from its maiden voyage.

Later this week Lucasfilm’s Star Wars: The Rise Of Skywalker will become the seventh film released by Disney in 2019 to breach the $1bn barrier after another solid session. The sci-fi added $39.3m worldwide for $989.3m, and added $24.2m for a $511.4m international running total, compared to $478.2m from North America.

The final markets saw a $2.5m ($3.1m including previews) debut in South Korea to rank second behind Universal’s Dolittle, and $1m ($3m including previews) in Philippines. The UK remains the overall lead market on $71.4m, followed by Germany on $61.3m, Japan on $54.3m, France on $48m, and Australia on $29.9m. The Rise Of Skywalker stayed top for the fourth consecutive weekend in France and Germany.

Underwater, the thriller starring Kristen Stewart from Chernin Entertainment and TSG and distributed by Fox, earned $7.1m internationally and $14.1m worldwide. It opened in 21 markets, led by Indonesia on $1.5m for number one, France on $1m in second place, and Mexico on $900,000 in second place. Underwater arrives in the UK on February 7.

Little Women crossed $100m worldwide to stand at $107m following an $8.1m international weekend haul that raised the tally to $33.2m. The period drama directed by Greta Gerwig dropped 24% in the UK where $2.6m boosted the running total to $17.2m after three sessions. A 37% slide in Australia produced $1.4m and $6m after two weekends.

1917, heading into Monday’s Oscar nominations after a week in which it enjoyed success at the Golden Globes and earned nominations from the DGA and PGA, grossed $56.4m worldwide, of which $36.5m resulted from the number one North American bow, and $19.4m came through Amblin Partners for an early $20.7m running total. That combines with a $500,000 session from Universal markets for a $19.9m international weekend, and a $21.2m overall international running total.

Family adventure Dolittle starring Robert Downey Jr kicked off its run in fine style, coaxing $8.1m out of audiences in four territories. In particular the film impressed in South Korea where it ranked number one and grossed $6.8m, earning 40% market share, and in Ukraine, where $1.1m ensured Universal’s fourth highest opening in history.

1917 grossed approximately $500,000 from Universal ahead of a wider roll-out next weekend that will bring debuts in France, Germany, and Mexico. Leading the line this weekend was Singapore on $289,000 for number one, and $162,000 for Chile, ranking fourth.

Strong word-of-mouth ensured gangster caper The Gentlemen added $4m for an early $14.2m running total. The film earned most of its money from the UK via Entertainment Film, where $2.2m following a 23% drop ensured third place and boosted the tally to $7.8m after two sessions. Roadshow reported a $1.6m weekend in Australia after a 34% drop, where the film ranks third and climbed to $5.8m after two. Combined with New Zealand, Roadshow’s total stands at $6.4m.

At this stage, the film is tracking some 72% ahead of The Man From U.N.C.L.E., 52% ahead of Hitman’s Bodyguard, and 21% ahead of Knives Out. Remaining international territories will start rolling out with North America in two weeks. Upcoming key releases are: Middle East (Eagle) and Taiwan (Moviecloud) on January 24, France (SND) on February 5, Russia (Volga) on February 13, Mexico (CDC) on February 14, and Germany (Universum) on February 27.