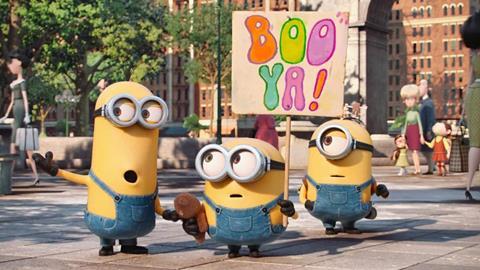 Jurassic World is on the cusp of crossing $1bn and stands at $996m. Trainwreck has reached $24.8m.

The US smash Straight Outta Compton has taken an early $9.7m outside North American and hits Australia and New Zealand and Poland this weekend, while Barbie: Rock N’ Royals opens in select Middle Eastern markets.

Pixar’s Inside Out stands at $378.4m via Walt Disney Studios Motion Pictures International and Marvel Studios’ Ant-Man has amassed $200.5m and opens in South Korea. Avengers: Age Of Ultron has taken $945.7m.

Sony Pictures Releasing International opens Ricki And The Flash in around 30 territories such as the UK, Germany, France, Brazil and South Korea. Sundance hit Dope rolls into the UK. Pixels has grossed $117.6m.

Fox International executives reported that Hitman: Agent 47 stands at $29.4m and arrives in Russia, Argentina and South Korea this weekend.

Sundance hit Me And Earl And The Dying Girl opens in the UK, Australia and New Zealand. Werner Herzog’s Queen Of The Desert arrives in Germany.

Warner Bros Pictures International’s The Man From U.N.C.L.E. on $39.8m infiltrates Mexico, Brazil and Italy, while The Gallows on $18.6m arrives in South Korea. Vacation has amassed $29.8m.