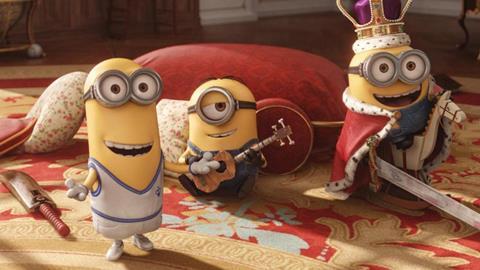 UPDATE: Minions has scored the biggest animated opening of all time in 25 territories, among them France, Mexico and Russia this weekend.

There are 11 territories to go over the next two months. The global running total factoring in the $115.2m North American launch stands at $403.5m.

Jurassic World added $23.1m from 65 for $877.2m and has overtaken Frozen to rank as the seventh biggest international release ever. It is the fifth biggest global release.

UPDATE: Terminator Genisys ventured into 14 markets including Japan, Germany, Spain Italy and Argentina for a confirmed $46.5m session from 60 territories that pushed the tally to $155.5m.

Inside Out brought in a further $19.1m from territories to reach $151.8m as Disney crossed $2bn for all its international releases for the year-to-date. The global running total starts at $435.4m.

It opened in Australia on $3.9m from 401 screens including previews and was locked in a tight contest for top spot with Minions and Inside Out. France delivered $563,000 from 295 including previews in the opening weekend. The UK added $1.5m for $6.2m.

Horror release The Gallows kicked off on $1.3m from 13 territories including $424,000 from 77 in Argentina and arrives in the UK and Mexico this week. Mad Max: Fury Road stands at $216m.