JANUARY 17 UPDATE: The sci-fi delivered the best result of Hollywood releases this weekend, scoring an estimated $32.5m from 65 markets to reach $147.1m. 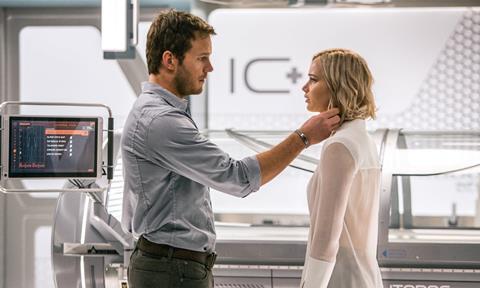 The film, presented in association with LStar Capital, Village Roadshow Pictures, and Wanda Pictures, opened top in a slow session in China on $17.5m from 12,000 screens.

Passengers stayed top in Germany for the second consecutive weekend on $2.5m for $8.2m and added $1.4m for $8.1m in Australia. France has generated $8.1m after three and Brazil $5.7m after two.

Resident Evil: The Final Chapter grossed a further $1.4m in Japan for $31.5m after four sessions. The rest of the world will follow in the coming weeks.

UPDATE: Assassin’s Creed led the charts in 14 markets as the video game adaptation added $23.1m from 79 and climbed to an early $132.7m running total.

Bollywood release OK Jaanu, from Fox International Productions and FoxStar, took $2.8m from India and the UK as the former generated $2.7m.

The film underperformed in its second session in China to deliver $9.8m for a relatively weak $53.4m. Had it stormed off to an earlier start the film would have crossed $1bn last week.

However the running total is good enough to put China second behind the UK, where Rogue One stands as the 11th highest grossing film of all-time on $77.5m.

The animation arrived in South Korea on $4.7m to rank as the top Western release and Disney’s third best animation launch behind Frozen and Big Hero 6.

UPDATE: Illumination Entertainment’s animation Sing crossed $400m worldwide on Monday (January 16) after a $14m international haul from 61 territories propelled the running total to $166.2m and combines with $238.2m from North America for $403.7m.

The film arrived at number one in France on $2.4m and opened in second place in Germany on $2.1m.

Nocturnal Animals added $1.1m from 27 territories for $16.9m internationally and $27.5m worldwide. The drama-thriller opened in South Korea on $143k and in Belgium and Israel on $85k and $50k, respectively.

Allied grossed $8.4m from 44 markets including 14 new openings as the wartime romance climbed to $62.2m. South Korea delivered the top launch on $2.4m, while Italy generated $1.9m and Mexico $1.4m.

Monster Trucks grossed $4m from 17 including seven new openings to reach $14.7m. The animation adventure opened in Australia $1m and in Malaysia on $450k.

The crime noir’s staggered release pattern sees debuts in France this week, followed by Australia and Spain at the end of January and Germany on February 2.

Horror release The Bye Bye Man generated $1.3m from 11 international markets and opened in seventh place in the UK on $700k. The Netherlands arrived at number 12 on $125k and Belgium placed fourth on $90k.