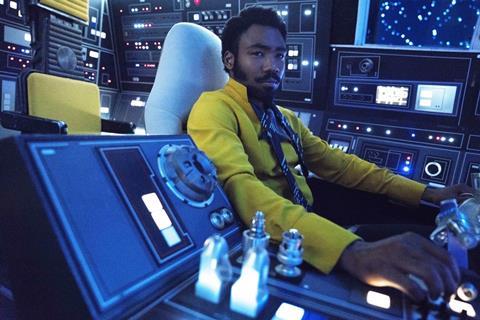 MAY 25 UPDATE: Solo: A Star Wars Story grossed an estimated $11.4m from its first two days in 43 markets, opening number one in many.

On Friday the film debuts in Mexico, China, Spain, India, Poland, South Africa, Turkey, and Vietnam. The only major market not opening this weekend is Japan, which receives the film on June 29.

Solo and Deadpool 2 will thrash it out for box office supremacy this session as Disney/Lucasfilm’s sci-fi debutant goes head-to-head with Fox’s R-rated titan in what is expected to be a potent second weekend.

Approximately half of that $300m estimate is expected to come from international markets, making Solo the odds-on favourite to usurp Deadpool 2 as the box office champion. The latter scored the highest R-rated international debut in history last weekend on $174.9m and currently stands at $207m with no significant new markets this weekend.

The joy of being Disney is that the company owns three massive content stables and can occasionally appear to be competing against itself. Besides Lucasfilm’s Solo, there is the small matter of Marvel Studios’ Avengers: Infinity War, which remains vibrant after four sessions. It will add to the $1.246bn international tally and could cross $1.3bn by the end of the weekend.

Melissa McCarthy comedy Life Of The Party opens through Warner Bros Pictures International in the UK and Australia. Rampage stands at an even $300m, and Game Night $46.1m with Brazil set to open this weekend. Ready Player One has grossed $435.9m.