Sony’s action-comedy will vie for the international box office crown this weekend against Chinese smash Monster Hunt — although it holds a few territories itself — as well as Disney-Marvel Studios’ Ant-Man and Universal-Illumination’s Minions. 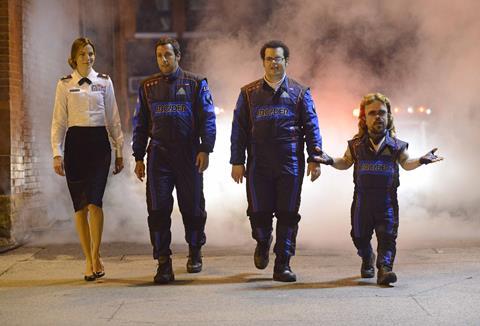 Edko Films’ Monster Hunt could well remain the biggest film at the international box office. The fantasy crossed RMB 1bn in a record eight days this week and stands at $169m and counting.

Disney-Pixar’s Inside Out crossed $500m worldwide this week and stands at $198.6m internationally through Walt Disney Studios Motion Pictures international.

The weekend brings debuts in the UK, Germany and Italy, all of which are expected to play a considerable role in pushing the film over $200m internationally.

Marvel Studios’ Ant-Man has climbed to $81.5m heading into its second session, when it will open in Germany, Spain, Sweden and India, among others. Avengers: Age Of Ultron has grossed $939.4m.

Fox International opens its YA mystery drama Paper Towns in around 32 territories day-and-date with North America, among them Mexico, Russia and Singapore.

Poltergeist has produced $47.6m and arrives in Taiwan and Thailand. Spy stands at $120.8m.

Warner Bros Pictures International executives reported that Magic Mike XXL has amassed $34.2m and ventures into Germany. Horror title The Gallows on an early $5.9m has debuts lined up for France, Russia, Brazil and Australia.