AUGUST 15 UPDATE: Warner Bros’ R-rated kept new arrival Sausage Party at bay despite a precipitous 67.4% drop in its second weekend that shows how top-heavy the demographic can be for comic book adaptations. 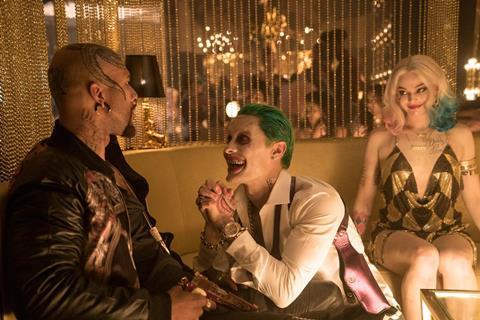 Suicide Squad stands at $222.6m in North America and $466m worldwide. Studio executives should take joy from that, although the reported $175m production cost – likely to be higher as it invariably is – plus tens of millions in marketing on top means it needs to rumble on everywhere before executives can view this as an unqualified success.

Buena Vista opened the family film Pete’s Dragon at number three in what was a disappointing $21.5m start in 3,702 venues for the allegedly $65m production.

After three weekends Universal’s Jason Bourne ranks fourth on $127m and has overtaken 2012’s Jeremy Renner starrer The Bourne Legacy. It has grossed more than 2002 franchise pilot The Bourne Identity although not in real terms.

The Walt Disney Studios currently holds the four highest grossing global releases of 2016 so far, with Captain America: Civil War on $1.152bn, Zootopia on $1.023bn, The Jungle Book on $948m and Finding Dory on $897m.