'The Magnificent Seven' rides out through SPRI, MGM

The western remake, which MGM and Columbia Pictures co-financed, rides out in 39 markets through Sony Pictures Releasing International (SPRI) this weekend. 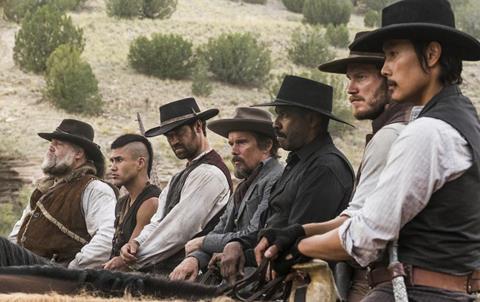 Highlights are expected from debuts in the UK, Germany, Mexico, Spain, Italy, Russia and Brazil.

The Magnificent Seven also opens in 21 territories through MGM licensees, among them Scandinavia, the Middle East and Poland.

Mike And Dave Need Wedding Dates has grossed $30m, and Morgan an early $3.6m with a debut in Belgium. Dislike launches in Russia.

Bridget Jones’s Baby stands at $47.3m through Universal Pictures International and opens this weekend in Italy, Switzerland and India, while The Secret Life Of Pets has generated $449m and Jason Bourne $236.1m.

Laika Entertainment’s Kubo And The Two Strings has reached an early $11m and arrives in France, Switzerland and Sweden. The Purge: Election Year is on $35m. Big Bang Made opens in the Philippines.

Star Trek Beyond has grossed through $176m Paramount Pictures International, while MGM-Paramount’s Ben-Hur has reached $54.1m.