JULY 11 UPDATE: The latest release from Universal / Illumination Entertainment bolstered the stealthy muscularity of summer box office with the biggest launch for an original animation property in North America. 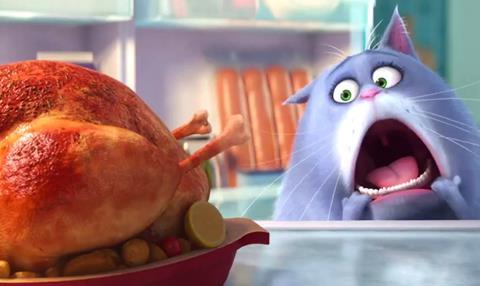 The $104.4m debut in 4,370 theatres means The Secret Life Of Pets, directed by Despicable Me’s Chris Renaud alongside Yarrow Cheney, delivered another highlight for Illumination chief and Hollywood animation force Chris Meledandri, who finds plenty of good cheer in the month of July.

A year ago Illuminations’ global smash Minions opened top on $115.7m. This weekend’s top 12 beat that session by less than a point and gained 14.9% on the three-day portion of last weekend’s holiday period.

US comic Louis C.K. voices Max, a terrier who hates his owner’s new pet. Kevin Hart, Eric Stonestreet and Jenny Slate also feature in what is already shaping up to become a likely franchise.

Turning to another proven animation property, Pixar’s Finding Dory became that company’s biggest North American hit as it overtook Toy Story 3 ($415m) to reach $423m via Buena Vista, dropping to number three after three sessions in pole position. The film is already the biggest North American release of the year-to-date.

Warner Bros/Village Roadshow’s The Legend Of Tarzan stayed second in its second weekend following a 45.5% drop to stand at $81.8m. The purported $180m price tag means the adventure will need to deliver superior results internationally to spare executives’ blushes. It has amassed $56m outside North America so far.

Fox’s comedy Mike and Dave Need Wedding Dates arrived in fourth place on $16.6m from 2,982, a decent start given the stated $33m production cost. Universal’s The Purge: Election Year dropped 60.7% to number five and executives will be delighted with the $58.8m running total for the low-budget horror.

In its second session The BFG continued to struggle and fell 58.4% and three places to number seven on $38.9m. A reported $140m price tag means all eyes will be on the international performance, which thus far has generated an early $11.9m with many major markets still to come.

Similarly, Fox executives will be unhappy over the North American performance of Independence Day: Resurgence, which in its third weekend dropped three slots to number eight and has mustered $91.6m. The film reportedly cost $165m to make and has amassed $212.9m internationally.