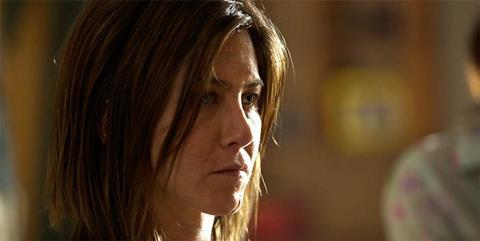 A committed, conscientious performance from Jennifer Aniston is the most compelling (and marketable) aspect of Cake. Daniel Barnz’s modest, well-intentioned feature follows a well-worn path through chronic pain, emotional agony and inconsolable grief.

Rarely challenged by such comic capers as We’re The Millers or Horrible Bosses, Aniston is commendable in her dedication to capturing the physical and emotional suffering of Claire Simmons.

The mixture of darkish comedy and soulful suffering is often respectably handled but Patrick Tobin’s screenplay tends towards the mawkish and never cuts as deeply as you might have hoped. Cake still has enough ingredients to attract an audience but more on the scale of a select arthouse proposition rather than a mainstream crowd.

Rarely challenged by such comic capers as We’re The Millers or Horrible Bosses, Aniston is commendable in her dedication to capturing the physical and emotional suffering of Claire Simmons. Much press coverage has already ensued from her decision to dispense with make-up in keeping with a character who has long given up caring how she looks.

Light scars that snake across Claire’s face and thighs testify to the aftermath of some tragic accident that has left her incapacitated by pain. Every cautious step prompts a flinch, every day of agony has soured her spirit by another degree. Aniston makes all of that palpable in her pained expressions, awkwardness when attempting to walk and adoption of the whispering voice of someone at the edge of despair.

We learn that Claire has been in treatment for a year with no signs of improvement over the past six months. Her husband Jason (Chris Messina) has been banished from their Los Angeles home and her only friend seems to be devoted maid and housekeeper Silvana (Adriana Barrazza). ” I pay here to care about me, ” says Claire who has developed into a cynical, sarcastic, Percocet-popping nightmare. Even her Chronic Pain Support Group can no longer endure her disruptive presence.

When we first meet the group, they are trying to console themselves over the suicide of Nina (Anna Kendrick). Claire tracks down Nina’s husband Roy (Sam Worthington) in an attempt to figure out why she did what she did. It is the beginning of a long journey towards some moments of catharsis.

Claire’s cutting, foul-mouthed attitude provides some of the guilty amusement in Cake but the film seems less confident when trying to dig deeper into her problems. Fantasy, dream sequences in which she is visited by Nina’s ghost add little to the story and lumber Anna Kendrick with a thankless role. Eventually, the source of everything proves to be exactly what we have guessed from the very beginning and the film starts to drift and deteriorate into something perilously close to a trite, TV-movie tearjerker rather than something as harrowing and real as a Cassavetes drama.