Cannes 2016: Out of Competition

The full line-up of world premieres Out of Competition at the 69th Cannes Film Festival with details on each title including sales contacts. 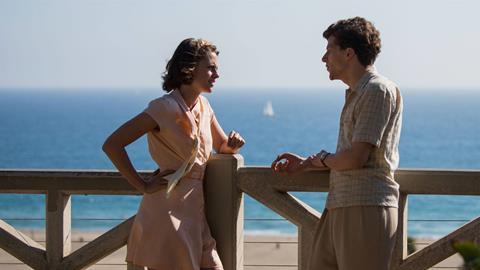 Marking Allen’s 15th film to screen in Cannes, all out of competition, this typically self-aware romantic comedy stars Kristen Stewart (who is also at the festival with Olivier Assayas’ Personal Shopper) and Jesse Eisenberg as a couple who fall in love against the backdrop of Hollywood’s Golden Age. The film — Allen’s 46th as a director — is his third to open the festival, following Midnight In Paris in 2011 and Hollywood Ending in 2002.

The BFG (US)
Dir Steven Spielberg

Spielberg reunited with the now late screenwriter of ET: The Extra-Terrestrial, Melissa Mathison, on this adaptation of Roald Dahl’s fantastical tale of a small girl in a land of giants. Mark Rylance, fresh from his Oscar win on Spielberg’s Bridge Of Spies, plays the titular giant. Spielberg’s history with Cannes stretches back to 1974 and his first film for cinema, The Sugarland Express, which won best screenplay. ET: The Extra-Terrestrial was the closing film in 1982 and the last festival screening to show in the former Palais Croisette theatre. Spielberg chaired the jury in 2013. Disney opens the film around the world from June.

Foster returns to Cannes as a director for the second time following 2011’s The Beaver. Playing out in real time, the film features George Clooney as the host of a financial TV show who is kidnapped by Jack O’Connell’s disgruntled investor, while Julia Roberts, as the show’s producer, tries to mediate the situation. Clooney produced with his Smokehouse Pictures partner Grant Heslov, alongside Allegiance Theater’s Daniel Dubiecki and Lara Alameddine.

Na (The Chaser, The Yellow Sea) returns to the Croisette for the third time with his latest thriller The Wailing (Goksung), which is set in a rural village where the locals begin to drop dead as rumours swirl around a recently arrived stranger. Financed and distributed locally by 20th Century Fox Korea, the film has a May 12 release date in Korea and stars Kwak Do-won (The Shameless) as a police detective investigating the case and Hwang Jung-min (Veteran) as the shaman who assists him.