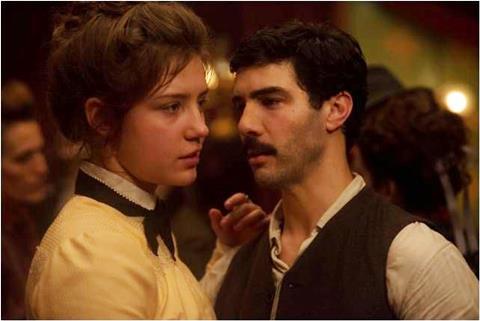 Cannes Critics’ Week, devoted to first and second features, has unveiled the line-up for its 54th edition (May 14-22).

In total, 1,750 shorts and 1,000 features were submitted for consideration.

“On the poster the actress Lou de Laâge embraces the open horizon in front of her,” he said. “This wonderful energy and amazing life force it carries embody the desire leading us to discover the new breath of fresh air in cinema worldwide.”

The section will open with French Elie Wajeman’s second film The Anarchists (Les Anarchistes) set in Paris in 1899, starring the reportedly sizzling on-screen couple of Tahar Rahim and Adèle Exarchopoulos.

Rahim stars as a French army corporal commissioned to infiltrate a dangerous anarchist group, who falls for the girlfriend of its leader, played by Exarchopoulos, in her biggest role since Blue Is The Warmest Colour.

Wajeman’s debut feature Aliyah – starring Pio Marmai and Cédric Kahn as two Jewish brothers who decide to emigrate to Israel in search of a better life - premiered in Directors’ Fortnight in 2102.

The closing film is Mathieu Vadepied’s Learn by Heart (La Vie en Grand) about a troubled adolescent living in two rooms with his single mother in an impoverished Paris suburb who decides to take his destiny in his own hands after an unexpected event.

It is co-produced by Intouchables directors Eric Toledano and Olivier Nakache.

There will be special screenings of Korean director Han Joon-hee’s Coin Locker Girl, about a girl found as a baby in a locker in a subway station; and actor Louis Garrel’s debut feature Les Deux Amis, starring Garrel and Vincent Macaigne as two friends who fall for the same girl, played by Golshifteh Farahani, a sandwich stall attendant with a secret.

A total of seven films will screen in the feature-length competition:

There are a further 10 titles in the short and medium-length competition, including Chickenpox (Varicella) by Italy’s Fulvio Risuelo, who took won a Cinefondation award at Cannes last year for his short film Lievito Madre; and US director Kevin Phillips’ Too Cool for School, about an apathetic teenager who quits school with nightmarish consequences.

As part of the Critics’ Week programme, the 10 directors in the short and medium length competition have been invited to participate in the new Next Step programme, aimed at accompanying them on their journey towards making their first feature.

As previously announced, the jury will be headed by Israeli actress and director Ronit Elkabetz. She will be joined by director Katell Quillevéré, cinematographer Peter Suschitzky, Toronto programmer Andréa Picard, and film critic Boyd Van Hoeij.