Animation co-produced by Wild Bunch and Studio Ghibli premiered at Cannes in Un Certain Regard. 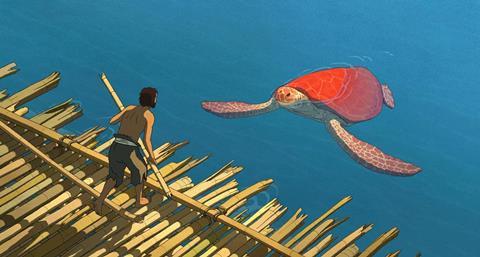 The Red Turtle is produced by Wild Bunch and Studio Ghibli - the first European co-pro with the Japanese animation studio behind My Neighbour Totoro and Spirited Away - in association with Why Not Productions.

The deal was negotiated by Carole Baraton on behalf of Wild Bunch and Sony Pictures Classics.

The film recounts the milestones in the life of a human being through the story of a man shipwrecked on a tropical island inhabited by turtles, crabs and birds.

“The Red Turtle takes you on an ultimate journey through life,” said a statement from SPC, following the acquisition.

“It sweeps you up in fantasy, poetry, and awesome visual beauty.  Artistically and commercially it is a major movie for all ages.

“It is a privilege to collaborate with Studio Ghibli, Pascal Cauchetaux, and Wild Bunch in bringing The Red Turtle to American audiences.”