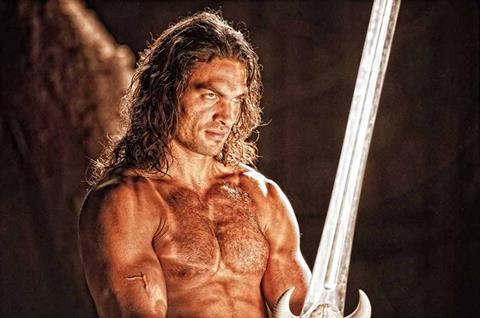 The latest iteration in a character that has held a grip on fan imagination for almost eight decades, Conan the Barbarian is a full-bodied piece of throwback sword-and-sorcery entertainment that dutifully meets its target-demographic quotients for violence and nudity, but otherwise inspires little in the way of crossover thrill or appeal. A convincing backdrop can’t completely save a narrative stuck somewhere between unapologetic pureblood retribution and something a bit more ambitious.

Momoa has a certain snarling charisma that, combined with his well honed physique, nicely matches the needs of the part.

A lack of star power and a head-to-head commercial battle with another long dormant, R-rated, rebooted property, Fright Night, could prove mortally damaging for Conan’s Stateside theatrical prospects. But robust international character appeal and strong ancillary value could nonetheless salvage its franchise potential, in much the same way that the Underworld series carved out a profitable niche despite an opening entry that made less than $100 million worldwide.

The film opens in vaguely described ancient times, in an outpost of Hyboria, on a headstrong young Conan (Leo Howard), who proves his Cimmerian warrior clan mettle by outwitting older peers in a race and slaying a quartet of snarling attackers in a test of manhood. Later he is unable, however, to stop his village from being overrun and ransacked by a vicious group of bandits.

As a grown man, Conan (Jason Momoa) sets out to avenge the murder of his father Corin (Ron Perlman) by Khalar Zym (Stephen Lang), and finds that Zym and his witchy daughter Marique (Rose McGowan) have designs on a “power no mortal man should possess,” in the form of a magic mask made of bone fragments of past kings’ skulls. Preventing Zym from accomplishing this is much a side task to his bloodthirsty quest for personal vengeance, but when Zym gets his hands on said crown, all that remains between him and ultimate power is the virgin sacrifice of a bloodline princess, Tamara (a fetching Rachel Nichols), in the gruff Conan’s care.

First introduced in the early 1930s in a series of short stories by pulp fiction author Robert E. Howard, Conan the Barbarian charts a more streamlined course of revenge than John Milius’ same-named 1982 film, which helped launch the acting career of Arnold Schwarzenegger. Eschewing the motivation of a personal slave history, this Conan seems a sword-wielding nomad who liberates so that he might enjoy the spoils of victory.

Shot in Bulgaria on a variety of locations, Conan achieves a convincing look and scope on a budget less than many other films of its brethren. Director Marcus Nispel, who helmed both Pathfinder and two other remade properties in the form of The Texas Chainsaw Massacre and Friday the 13th, has experience blending shamelessly prurient bits (there are seven credited “topless wenches” in the movie) with bloodletting and mayhem. Some imaginative weaponry and creatively staged fights, most notably between Conan and some of Marique’s sandy minions, are among the movie’s high points, though an escape with sidekick Ela-Shan (Saïd Taghmaoui) from a giant water snake is confusingly edited.

The problem is that Conan just doesn’t have much punch in the way of originality. Also, it seems to wear its mythical and magical trappings uneasily, deploying them fitfully and with little in the way of established rules. On the other hand, any tenuous claim to historical mooring or air-quote reality is basically ceded by Marique’s costume, which resembles a hypothetical cross between the Red Queen of Alice in Wonderland and Freddy Krueger’s sister. It’s a get-up which is out of step with the rest of the cast and has no point of reference save its extremely photogenic nature.

Unlike plenty of recent slices of spectacle entertainment, the 3-D in Conan is not rendered in a fashion that cuts down on the action’s illumination. Neither is it particularly essential, however; 2-D viewings will save audiences money, at the cost of only a few matted deep-background settings.

Momoa, fresh off his recurring role on HBO’s well received small screen hit Game of Thrones, has a certain snarling charisma that, combined with his well honed physique, nicely matches the needs of the part. In limited screen time, young Howard, too, helps credibly establish Conan’s athletic bona fides, allowing Momoa to step in and slay straight away, without the need for cumbersome exposition.

A tacked-on narration by Morgan Freeman comes across as awkward, and is rendered even more ineffective and glaringly strange by the fact that it opens the film, pops up once in the middle and is jettisoned in the conclusion.

Screenplay: Thomas Dean Donnelly & Joshua Oppenheimer and Sean Hood, based on the character of Conan as originally created by Robert E. Howard