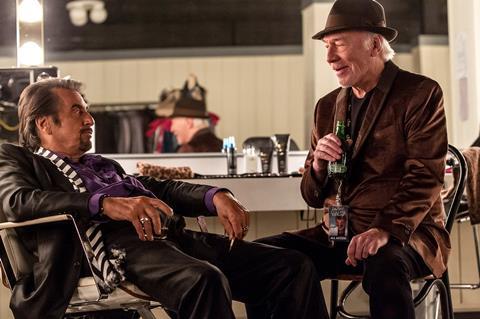 An aging, lazy rock star who once had real artistic promise stumbles toward redemption in Danny Collins, which is itself a sad case of wasted potential. Led by a shaggy, inconsistent, overly cutesy performance from Al Pacino, the directorial debut of prolific screenwriter Dan Fogelman (Last Vegas and Crazy, Stupid, Love.) badly overestimates how lovable its main character is, and as a result the audience may find itself reacting much more harshly to him than the other characters do.

For the most part, Danny Collins finds Pacino doling out a sloppy kind of charm that’s the equivalent of the dopey puppy that won’t stop jumping in your lap.

Opening March 20 in the States, Danny Collins boasts some marketable hooks, most of which will appeal to an older demographic. Featuring prominent John Lennon songs from his post-Beatles period, the movie not only stars Pacino but also Annette Bening, Jennifer Garner, Christopher Plummer and Bobby Cannavale, and the film’s tear-jerking, feel-good story about a famous musician reconnecting with his estranged son should play well with undemanding crowds who want a little comfort-food entertainment. Those who enjoyed Last Vegas, And So It Goes and similar movies about the regrets and worries of aging characters could give this comedy-drama a try, but they may prefer waiting for the small screen.

Danny Collins stars Pacino as the titular singing sensation. In the early 1970s, he came onto the music scene with an ambitious album of personal, insightful singer-songwriter material, but when the record failed to become a critical and commercial success, Danny decided to play it safe, transforming himself into a middle-of-the-road interpreter of other people’s songs. Now in his late 60s or early 70s, Danny is a wealthy man and a concert staple, singing the same cheesy old hits to an elderly, nostalgic audience. Snorting cocaine and drinking booze, and getting ready to marry a gorgeous nincompoop half his age, Danny tries to forget what a joke his life is.

The film, which was written by Fogelman and loosely based on a true story, gets into gear when Danny’s long-time manager Frank (Plummer) presents him with a birthday present. It turns out that Danny’s idol, John Lennon, had written Danny a note back in the early ‘70s, encouraging him to follow his muse and ignore what others say he should do with his career. The note has only recently been retrieved, and Frank gives it to Danny framed. Moved by Lennon’s words, Danny wonders what might have happened if he had received the note when he really needed it. Deciding that he’s wasted enough of his life, Danny cancels his latest tour so he can focus on writing songs for the first time in decades — and, he wants to travel from Los Angeles to New Jersey to meet his adult son Tom (Cannavale), who was the product of a one-night stand so long ago.

There are intriguing ideas at the core of Danny Collins: the challenge of being true to oneself, the difficulty of making amends for past sins, the shallowness of the music industry. But what proves irritating throughout the movie is the sense that Fogelman has chosen the easiest, least interesting execution of a rich premise. Phoning in his concerts and happy to rest on past laurels, which weren’t that impressive in the first place, Danny for a brief moment remembers what it was like to care deeply about his art. But Lennon’s letter doesn’t inspire much of a reckoning: Rather, Danny is soon trying to make nice with the disgruntled Tom, his sympathetic wife (Garner) and their aggressively adorable daughter Hope (Giselle Eisenberg). His interactions with the family members contain little of the anger, resentment and guilt that would, presumably, be prominent in such a situation.

Along those same lines, Danny Collins makes the critical mistake of positioning Danny as, basically, an adorable screw-up who just needs to stop doing drugs to turn his life around. Though the movie suggests that this rock star has been a bastard and an out-of-control hedonist in the past — he’s burned through several marriages — Pacino plays him without any discernable darkness or demons. And so what we see is a slightly kooky older man who tries too hard to ingratiate himself with those around him. (When Danny isn’t making up for lost time with Tom’s family, he’s courting Mary, the manager of the New Jersey hotel where he’s staying, who’s played by Bening.) But Danny doesn’t really have to change his behaviour or go through any personal ordeal: It’s merely a question of when the other characters will finally warm up to him.

It’s customary to note that Pacino’s artistic peak seems far behind him, but when he occasionally imbues Danny with a sense of regret while reaching out to his son, the conviction of old can still be seen. But for the most part, Danny Collins finds him doling out a sloppy kind of charm that’s the equivalent of the dopey puppy that won’t stop jumping in your lap. Because the movie never challenges Danny on his supposed failings, his redemption comes surprisingly easily. Oddly, it’s actually Tom, a blue-collar worker trying to support a growing family (his wife is pregnant with their second child), who’s forced to change, forgiving this deadbeat dad. But why? Isn’t he the aggrieved party? Not from the perspective of Danny Collins, which takes it on faith that Danny really is a good guy who deserves the benefit of the doubt.

The performances around Pacino are solid, straining to bring gravity to Hallmark sentiments. Garner is all maternal grace, while Cannavale digs into the few moments where his character can really admonish Danny. Bening has been given the unenviable task of being endlessly charmed by Danny’s lame flirtations. As for Plummer, he’s an old pro playing an old pro as the loyal manager who’s seen his client and friend through his peaks and valleys. Perhaps the best supporting role goes to Lennon’s songs on the soundtrack. They’re forced to do a lot of emotional heavy lifting in a clichéd story, but thankfully eternal gems like “Imagine” emerge unscathed from the experience.