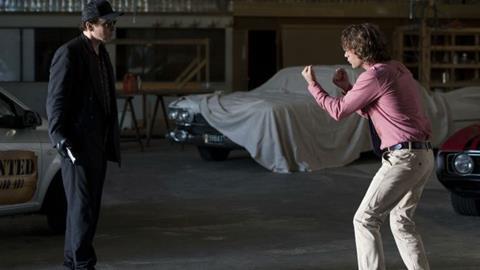 Australian B-movie director legend gets his hands on an A-ish list cast of Hollywood stars – in the form of John Cusack and Thomas Jane – for this Oz-set crime-caper, and while it offers little new to the much-seen car-action-comedy-crime genre it at least delivers a goodly amount of good natured action fun but in the end suffers from being just too low-key for its own good.

It is all pretty-much by-the-numbers stuff, with Thomas Jane at least giving it his all and working nicely alongside Trenchant-Smith’s signature breezy delivery.

The generic title may sound all-action – and rather close in tone to far superior titles such as Nicolas Cage starrer Drive Angry, or even Ryan Gosling in Drive – but this variation on the familiar theme of a mis-matched pair taking to the steering wheel for some criminal intent offers modest returns for fans of car flicks. It gets a theatrical release early October in the US.

Jane plays long-haired former professional driver Peter who now leads a life of not-quite domestic bliss Down Under, working as a driving instructor while his organised lawyer wife (Yesse Spence) keeps an eye on the purse-strings and his ambitions to set up his own business.

But his rather hum-drum life takes a change of direction when his latest client turns out to be fellow American Simon (John Cusack), who takes his lesson less than seriously by ignoring traffic laws. And when Peter takes over the wheel again Simon uses the opportunity to pop into a local bank and emerge again chased by guards.

The pair end up on the run from cops, as well as being tracked by independent security types under instruction to kill from bank head Rossi (Christopher Morris) – who know Simon and is aware he knows stuff about the bank’s money laundering – and federal investigators (Zoe Ventoura and Jason Wilder) who also have their own agenda.

It is all pretty-much by-the-numbers stuff, with Thomas Jane at least giving it his all and working nicely alongside Trenchant-Smith’s signature breezy delivery. John Cusack – often barely recognisable behind his usual black clothes, gloves, sun-glasses and black baseball cap – looks rather ill-at-ease in a thinly written role the doesn’t make the most of his natural left-field charisma. There are some nicely staged driving sequences and Thomas Jane has some fun with his role, but despite the B-movie title the film never quite delivers the visceral thrills or genre spills so make it stand out.