Errors Of The Human Body 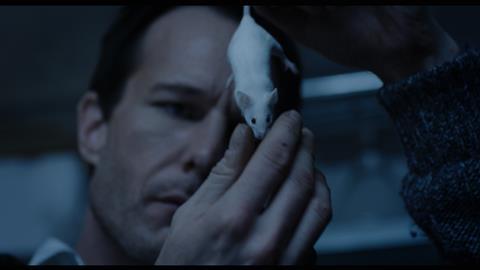 A low-key, haunting science fiction film dealing with medical experiments and mutation, Errors Of The Human Body - feature debut of Australian writer-director Eron Sheean, who co-wrote Xavier Gens’s The Divide and collaborated on this script with former Edinburgh Film Festival artistic director Shane Danielsen - gains from the slow-burning lead performance of Michael Eklund, a busy Canadian supporting player who gets a real showcase here (in a buttoned-down performance very different from his maniacal turn in The Divide), and makes fine use of wintery Dresden locations.

Less fanciful than many a mad scientist movie, with authentic laboratory locations and a sly sense of humour about its characters’ obsessions that gives it a rare sense of how real-world science is conducted at high levels.

Dr Geoff Burton (Eklund), a world-renowned geneticist still traumatised by the death of his infant son from a rare condition he has named Burton’s Syndrome, takes a position at a prestigious German research facility, hoping some long-term benefit can be derived from his son’s tragic and sudden fate.  Under the supervision of amiable, yet sinister bureaucrat Samuel Mead (UK comedian Rik Mayall, in a rare dead  straight role), Burton begins work  in the eerily underpopulated institution, which seems staffed entirely by secretive misfit monomaniacs.

The hero is approached by two contrasting researchers who would like him to share his findings with them: Rebekka (Karoline Herfurth), a former girlfriend, who is carrying out a program of experiments using Burton’s Syndrome cells to accelerate the regenerative powers of the axolotl; and Jarek (Tómas Lemarquis, from Nói Albínói), a creepy bald fanatic, who is working beyond the margins of ethics in the basement with stolen cell samples, virally-distributed medicines and some unfortunate mice.

Eventually, inevitably, Burton is infected with his own syndrome, which causes grotesque tumorous swellings like the early stages of the mutation in David Cronenberg’s The Fly.  Escaping from lockdown quarantine and stumbling through the city, pursued by the authorities like many a screen ‘monster’, Burton comes to a realisation about the true nature of his condition, which throws the death of his son into a new, even more tragic light.

Errors Of The Human Body tackles a great deal of material, with debates about the ethics of various fields of research, but is more concerned with its protagonist’s personal angst and the degree to which he will exploit or atone for his child’s death in the service of a nebulous breakthrough.

Less fanciful than many a mad scientist movie, with authentic laboratory locations and a sly sense of humour about its characters’ obsessions (Rebekka even comes to the institute’s fancy dress party in an axolotl costume) that gives it a rare sense of how real-world science is conducted at high levels (not since Ken Russell’s Altered States has labwork and chatter been so credible on film), it still gets into the farthest reaches of human biology for its ambiguous climax.  Eklund is likely to be in line for more leads after this, while Lemarquis - who has the pop-eyed, grinning, bald look of Peter Lorre in Mad Love - might find himself on call for Euro-villain roles.  Sheean is clearly a talent to watch.

This took the jury award (the Asteroide) for Best Film at the Trieste Science+Fiction film festival.