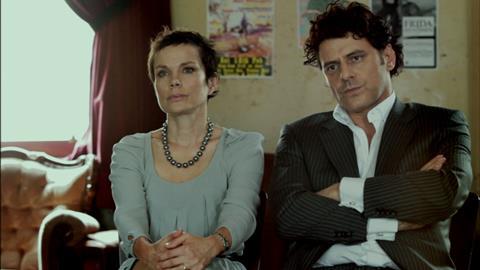 Some of Australia’s more prominent local actors are shareholders in this low-budget independent movie. It’s unlikely that they will be seeing any profits, but they clearly enjoyed working on challenging material by David Williamson, their country’s leading dramatist.

Though the film’s low budget is evident in some wobbly handheld camerawork and some oddly mixed music, the dramatic power of the situation is strongly maintained by a committed cast

Though winner of the top prize at the 2011 Santa Barbara IFF and joint winner at the TraverseCity (Michigan) FF, the feature will get only limited theatre runs – it opens locally on September 8 in only 8 cinemas — but is certain of decent TV/cable exposure and a long DVD life as a teaching tool. International prospects will be aided by the signing of a sales agent.

The project drew Hollywood director Michael Rymer (Perfume, Queen of the Damned) back to his native Australia where his debut feature Angel Baby won multiple awards in 1995. Shooting over 12 days with a three mini-camera digital setup, he gets maximum drama from what is essentially ten talking heads in a conference room.

The subject of Williamson’s stage play, on which this is firmly based, is conflict resolution via conferencing: instead of expensive legal proceedings, disputed cases are tackled face to face by the people involved, led by a trained mediator. ‘Based on actual case notes’, as an opening caption proclaims, the workplace bullying of big, simple Wayne (Luke Ford) leads to his desperate wrecking of the flashy Jaguar owned by smug boss Greg (Vince Colosimo). Ten people at the conference have ten different attitudes to the event’s back-story and mediator Jack (Matthew Newton) patiently leads the squabbling group towards an unlikely (even if ‘actual’) resolution.

Though the film’s low budget is evident in some wobbly handheld camerawork and some oddly mixed music, the dramatic power of the situation is strongly maintained by a committed cast. Standouts are Ford as ‘strange’ Wayne with the ‘quick fuse’, Sigrid Thornton as Greg’s defensive wife, and Robert Rabiah, powerful as Hakim, an underestimated worker.

Screenplay: Based on a play by David Williamson