15 acquisition titles to look out for at Toronto 2021 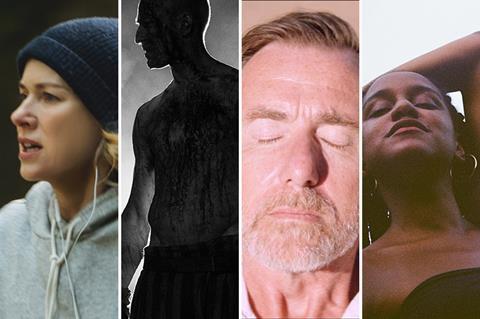 Ben Foster playing a concentration camp survivor, Jessica Chastain and Ralph Fiennes dealing with the aftermath of a fatal accident, and Naomi Watts as a mother during a school shooting are among the crop of acquisition titles in selection at 2021 Toronto International Film Festival (TIFF).

The first public screenings in Toronto and P&I screenings (or digital screenings where accessible worldwide) are listed for each film in Eastern Time. Individual browsers will post times based on the viewer’s location. Check the TIFF website for the full schedule. TIFF runs September 9-18.

All My Puny Sorrows (Can), Special Presentations
Dir. Michael McGowan
Sarah Gadon and Alison Pill play sisters – one a suicidal concert pianist, the other a children’s author with a complicated life – who contemplate their father’s suicide and their strict Mennonite upbringing in an adaptation of Miriam Toews’ novel. Mongrel Media will distribute in Canada.
Premiere: September 10 P&I 2pm Scotiabank; September 11, 5.30pm Princess of Wales
Sales: Voltage Pictures

The Box (La Caja, US-Mex), Special Presentations
Dir. Lorenzo Vigas
The director of 2015 Venice Golden Lion winner From Afar focuses on the Mexico-set tale of a young boy who becomes exposed to a sinister underworld when he goes to collect his father’s ashes and believes he sees the man on the street.
Screening: September 9, 5pm TIFF Bell Lightbox; September 10, P&I 1.30pm TIFF Bell Lightbox
Sales: international – The Match Factory; US – ICM Partners