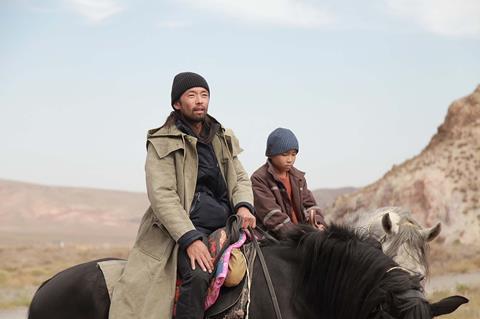 ‘The Horse Thieves. Roads Of Time’

A malevolent artificial intelligence, comic samurais and the courageous workers of Fukushima nuclear plant all rub shoulders on the latest slate of titles from Japan.

The 47 Ronin In Debt

Dir. Yoshihiro Nakamura
A group of samurai discover that revenge is an expensive business in this historical comedy, which premiered as a special screening at Tokyo International Film Festival last month. When a feudal lord is ordered to kill himself, his loyal men club together to avenge him, but find there’s not enough money left in the estate’s coffers to fund their plans. Nakamura’s diverse credits include crime drama The Snow White Murder Case (2014) and comedy The Magnificent Nine (2016). Shinichi Tsutsumi, Takashi Okamura and Gaku Hamada head the cast of his new film, which is scheduled for Japanese release on November 22.
Contact: Momoko Nakamura, Free Stone Productions

Dir. Hiroshi Nishitani
Based on a novel by Keiichiro Hirano, this romantic drama was filmed in Japan, Paris and New York and was released in Japan on November 1. Produced by Fuji TV Movies, the film stars Masaharu Fukuyama (Like Father, Like Son) as a classical guitarist who falls for a journalist engaged to be married to somebody else. Yuriko Ishida, whose credits include recent Fuji TV hit comedy Hit Me Anyone One More Time, plays the journalist working for an international news agency. The film marks the first time that a Hirano novel has been adapted for the big screen.
Contact: Shinji Sakoda, Pony Canyon

Dir. Yu Irie
Takao Osawa (Shield Of Straw), Kento Kaku (Psychic Kusuo) and Alice Hirose (The Gun) star in this mystery thriller about a researcher who is accused of terrorism when the artificial intelligence (AI) technology he invented starts to spin out of control. Yu Irie, who directed the film based on his own original story, has directing credits including Memoirs Of A Murderer (2017), a remake of the Korean thriller of the same name, and sci-fi drama The Sun (2016). His latest film is scheduled for Japanese release on January 31, 2020.
Contact: Naoko Satoh, Nippon TV

Dir. Masato Harada
Currently in post-production, Harada’s samurai drama is based on the true story of Toshizo Hijikata, who together with his men formed a group called ‘Shinsengumi’ to protect the shogunate. Scheduled for release in 2020, the film has a stellar ensemble cast including Junichi Okada, Ko Shibasaki, Ryohei Suzuki, Ryosuke Yamada and Hideaki Ito. Harada’s credits include historical epic Sekigahara (2017) and crime suspense drama Killing For The Prosecution (2018). Baragaki is adapted from Ryotaro Shiba’s novel, serialised in the 1960s, which sold more than 5 million copies in Japan.
Contact: Akihiro Takeda, Toho

Dir. Shin Adachi
Adachi’s second film as director, based on his semi-autobiographical novel Mosquito On The Breast, is a comedy drama about a struggling screenwriter who embarks on a road trip with his wife and daughter. Gaku Hamada (Samurai Shifters) and Asami Mizukawa (Black Widow Business) head the cast of the film, which received its world premiere in competition at the recent Tokyo International Film Festival. Shin is also an award-winning screenwriter — best known for penning Masaharu Take’s 100 Yen Love (2014) — who made his directorial debut in 2016 with teen drama 14 That Night.
Contact: Yasushi Miyamae, Colorbird

Dir. Setsuro Wakamatsu
Ken Watanabe (Inception) and Koichi Sato (Unforgiven) head the cast of this action drama, which tells the story of the courageous workers who remained on site to stabilise the Fukushima Daiichi nuclear power plant during its meltdown following Japan’s 2011 earthquake and tsunami. Wakamatsu, whose credits include disaster and action movies such as Whiteout (2000) and The Unbroken (2009), directs from a script by Yoichi Maekawa based on Ryusho Kadota’s book On The Brink: The Inside Story Of Fukushima Daiichi. Currently in post-production, the film is being lined up for release in March 2020.
Contact: Endeavor Content
Asia contact: Takeo Kodera, Kadokawa

Dirs. Yerlan Nurmukhambetov, Lisa Takeba
Described as a ‘Kazakhstani western’, this unusual Kazakh-Japan co-production follows a young boy living on the Central Asian steppes whose father is murdered by horse thieves. His mother takes him and his siblings back to her hometown, but then a strange man shows up at the door. Starring Samal Yeslyamova, who won the best actress prize in Cannes for Ayka (2018), the film was co-produced by Kazakhstan’s national film studio, Kazakhfilm, and Japan’s Tokyo New Cinema. It received its world premiere as the opening film of Busan International Film Festival and also played Tokyo International Film Festival as a special screening.
Contact: Keiko Yoshida, Gaga Corp

Dir. Takashi Shimizu
The latest horror from Shimizu tells the story of a village at the end of a forgotten tunnel from which nobody has ever returned alive. Starring Ayaka Miyoshi (Dance With Me), the film recently had its world premiere at Pingyao International Film Festival and is scheduled for Japanese release on February 7, 2020. Shimizu is best known internationally as the creator of The Grudge franchise in Japan and its English-language remakes in the US.
Contact: Naoki Shinozaki, Toei

The third instalment in a series based on a popular manga, Kaiji: Final Game again stars Tatsuya Fujiwara as a consummate gambler, this time lured into playing ‘Tower of Babel’, a sinister game of luck invented as a diversion for bored tycoons. Created by Nobuyuki Fukumoto, the Kaiji manga has previously spawned an anime TV series and two live-action films — Kaiji: The Ultimate Gambler (2009) and Kaiji 2: Jinsei Dakkai Game (2011) — and also inspired a Chinese live-action film, Animal World, released in June 2018. Kaiji: Final Game is scheduled for Japanese release on January 10, 2020.
Contact: Naoko Satoh, Nippon TV

Love Me, Love Me Not

Dir. Takahiro Miki
Based on Io Sakisaka’s popular ‘shojo’ manga, aimed at teenage girls, this dual-media romantic drama is being produced as separate animated and live-action features, each with its own ending and interpretation of the original work. It tells the story of two female and two male high school students and their first crushes, complicated by real world issues such as their parents’ divorce. A-1 Pictures is producing the animated feature, scheduled for release in May 2020, while Takahiro Miki is directing the live-action version, set for release in August 2020 and starring Minami Hamabe and Takumi Kitamura.
Contact: Akihiro Takeda, Toho

Dir. Takahisa Zeze
Go Ayano (Rage), Hana Sugisaki (Blade Of The Immortal) and Koichi Sato (Unforgiven) head the cast of this murder mystery about a small town that is shaken by two disappearances of young girls that take place more than a decade apart. The story revolves around an awkward loner (Ayano), suspected of being involved in the murders; the best friend of the first victim (Sugisaki), who is living with survivor guilt; and a man grieving his wife’s death (Sato), who comes up with a scheme to revive the declining community. Initially a ‘pinku’ or soft-porn director, Zeze has also directed indie features such as Heaven’s Story (2010) and mainstream titles including The 8-Year Engagement (2017). The Promised Land played at Busan International Film Festival and was released on October 18 in Japan.
Contact: Takeo Kodera, Kadokawa

Dir. Yuki Tanada
Currently in post-production, this quirky romantic drama tells the story of a man who falls in love and gets married, but neglects to tell his wife that his main occupation is making sex dolls. When he becomes too preoccupied with his work, and the marriage starts to fail, his wife reveals her own secret. Issey Takahashi and Yu Aoi head the cast of the film, which is scheduled for Japanese release on January 24, 2020. Tanada’s debut feature Moru won the grand prize at the 2001 Pia Film Festival and her credits also include The Cowards Who Looked To The Sky, which played at Toronto International Film Festival in 2012.
Contact: Emico Kawai, Nikkatsu

Dir. Shinichiro Ueda
Ueda’s second feature following his sleeper hit One Cut Of The Dead, this comedy caper follows a wannabe actor who faints when he gets nervous, but is told that his dramatic collapses look too fake. Along with his brother, he joins a talent agency that specialises in planting actors in real-life situations and the pair get roped into a scheme to expose a mysterious cult. Made for just $30,000, zombie comedy One Cut Of The Dead grossed more than $30m and became a cult hit on the international festival circuit. Produced by Shochiku, Special Actors again features a cast of mostly unknown actors and was released in Japan on October 18.
Contact: Shion Komatsu, Shochiku

Dir. Yoshinari Nishikori
Masahiro Komoto and Naho Toda head the cast of this drama about a town that is struggling with population decline and the loss of its traditional arts, as young people move away to the big cities. Its Japanese release is scheduled for the first quarter of 2020. Nishikori is best known for award-winning drama Railways (2010) and also has credits including Konshin (2012), Tatara Samurai (2016) and Meeting Myself (2019). Free Stone Productions has also picked up international rights to Meeting Myself, about a fisherman suffering from amnesia following an accident, which was released in May and stars Takahiro and veteran actress Keiko Matsuzaka.
Contact: Momoko Nakamura, Free Stone Productions

Dir. Masayuki Suo
Starring Ryo Narita (Just Only Love) and Yuina Kuroshima (12 Suicidal Teens), this period drama revolves around the Japanese performers, known as ‘katsudo-benshi’, who provided live narration at screenings in the silent film era. Suo’s credits include Shall We Dance? (1996), which was remade as a US film starring Richard Gere, and sexual harassment drama I Just Didn’t Do It (2006). Scheduled for Japanese release on December 13, Talking The Pictures premiered at Tokyo International Film Festival as a gala screening.
Contact: Naoki Shinozaki, Toei

Dir. Macoto Tezka
This live-action version of Osamu Tezuka’s erotic manga Barbara was directed by his son to celebrate the 90th birth year of the ‘godfather of manga’, who is best known internationally for creating the Astro Boy character. Goro Inagaki (13 Assassins) and Fumi Nikaido (Himizu) head the cast of the film, playing a novelist and his muse who drags him into the Tokyo underworld. An international co-production between Japan’s Thefool, Germany’s Rapid Eye Movies and the UK’s Third Window Films, the film also has Christopher Doyle (Hero, 2046) on board as cinematographer. It received its world premiere in competition at Tokyo International Film Festival.
Contact: Emico Kawai, Nikkatsu

Tora-San, Wish You Were Here

Dir. Yoji Yamada
A project to celebrate the 50th anniversary of Yamada’s beloved Tora-san series, this innovative feature combines 4K digitally restored images of its late star, Kiyoshi Atsumi, with new footage filmed with the surviving cast. Launched in 1969, the Tora-san series starred Atsumi as a travelling salesman and resulted in 49 films over a 28-year period, with the final one released in 1997 shortly after the actor’s death. This 50th instalment, which received its world premiere as the opening film of Tokyo International Film Festival, is scheduled for Japanese release on December 27.
Contact: Shion Komatsu, Shochiku

Dir. Masaharu Take
The sequel to Take’s 2018 comedy drama We Make Antiques! again stars Kiichi Nakai and Kuranosuke Sasaki as a couple of swindlers trading in antiques. Ryoko Hirosue joins the cast as a mysterious woman who recognises their skills and draws them into an international conspiracy. Both the sequel and original film are scripted by Shin Adachi, who also wrote Take’s 100 Yen Love. Its Japanese release is scheduled for January 31, 2020.
Contact: Keiko Yoshida, Gaga Corp