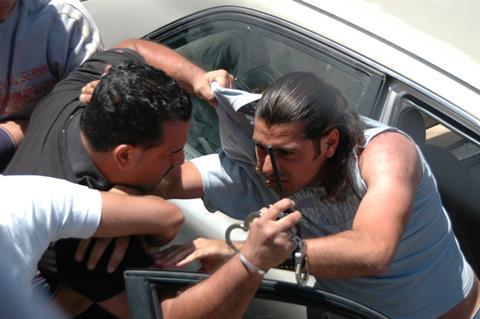 Ajami, a crime-infested Jaffa neighborhood, serves two young first-time directors (one Israeli, one Arab) as an allegory for the kind of pressure cooker climate the entire state of Israel is subjected to today. The result is an amazingly authentic picture, powerfully directed and interpreted by a totally inexperienced cast – and one with a strong chance of following The Band’s Visit and Waltz With Bashir to become Israel’s next crossover success.

A fractured chronology introduces a series of inter-related stories fatally united at the end by the same tragic knot.

Omar (Kabaha) desperately needs money: his uncle shot a member of another clan and triggered a vendetta which can only be stopped by paying off the more powerful clan. He’ll turn to crime or drug dealing if it’s necessary.

Malek (Frege), barely 16, is smuggled by relatives from the Occupied Territories into Jaffa and is working in a restaurant to help pay for his mother’s bone marrow transplant.

Binj (played by co-director Copti) would love to leave Ajami and move in with his Jewish girlfriend, but his brother has just knifed a Jewish neighbour and taken flight, leaving a package of drugs behind.

And then there’s Dando (Naim), an Israeli police inspector on the beat in Ajami. He’s a devoted family man whose life was turned upside down two years ago when his younger brother, a soldier on his way home from the military base, disappeared without trace.

All these characters, each one carrying his own pent-up anxieties, frustration and rage, confront each other in what initially appears to be separate stories but gradually they turn out to be pieces of one, single, larger puzzle.

Ajami offers a tragic portrait of life in the largely Arab city where it is impossible to live apart but hard to live together, in which family commitments, community obligations and national identities melt into and feed upon each other. Here, the innocents are always the victims. While it reflects on much larger issues, the film’s focus remains on the individual characters, all treated with understanding and sympathy by the two directors.

The natural acting by a cast of performers who have never before been in front of a camera, but went through 10 months of preparation for this shoot, is probably the film’s main asset. These are real human beings, not actors playing parts, and it is easy to believe in their confusion, disarray and anguish. One reason Ajami works so well may very well be that the two directors, an Arab (Copti) and an Israeli (Shani), insisted on preparing the most minute details in advance of the shoot in an attempt to make it real enough for inexperienced actors to feel at home and identify with their roles.

Unlike other film makers who claim to have all the answers, Copti and Shani admirably refrain from any kind of preaching or partisanship. Expertly shot and cut to keep up the momentum throughout and appropriate use of locations, their film cleverly invites the viewer to reach conclusions which are disproven a few minutes later.