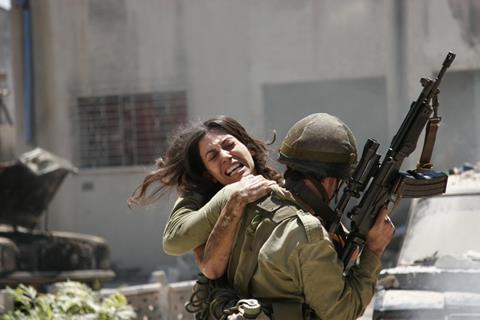 Based on the real-life experiences of writer/director Maoz, this grimly-harrowing piece claustrophobically follows four soldiers stuck inside an Israeli tank which has been immobilised for most of the film in enemy territory on the first day of the Lebanon War in 1982.

Set for a place of honour in world festivals and specialised art cinemas, Lebanon was an unusually long time in the making due to problems securing investment and the technical challenges of shooting an entire film inside a tank. It features some of Israel’s brightest young talents, covered in sweat and grime for the most part, convincingly reenacting some of the worst moments of Maoz’s life – possibly not in exact detail, but how he remembers them now.

The plot launches straight into the first day of war, a pleasant June morning with a new gunner (Donat) joining the three other members of the tank crew. Assi (Tiran) is the commander, Igal (Moshonov) the driver, and the assistant gunner, Herzl (Cohen), is in charge of ammunition. The tank is quickly dispatched on its first mission – to accompany a paratrooper unit on the way to a Lebanese village that has already been pummeled by the Air Force. No resistance is expected and none should turn up on the road; it’s just a routine, easy-going summer stroll.

Of course, nothing happens as expected. On the way to the target, one enemy car makes a charge, the tank gunner freezes and a paratrooper is killed as a result. Another car approaches but this time nobody takes any chances - the gunner pulls the trigger, the car is blown to pieces, and the driver lies, fatally wounded on the road screaming “Peace” before he is shot dead out of pity.  This is just an introduction to the real action – the unit and the tank reach the wrong village, they kill civilians who are being used as a shield by terrorists and are hit by an RPG missile shot by a Syrian soldier who shouldn’t have been there.

One wounded Syrian is taken prisoner and put inside the tank until they reach a safe haven. Some Phalangists (pro-Israeli Lebanese Christians) are sent in to lead the unit out of the trap it has fallen into. One enters the tank to tell the prisoner in great detail about what is in store for him, while urgent orders to move are stalled for a while as the tank is frighteningly immobilised.

With every new event, the world outside is viewed almost exclusively through the gunner’s telescope. Meanwhile, tension and clashes inside the tank are mounting, with fear and panic growing. The foursome confront the officer in charge of the field operation, Jamil (Strauss).

Effectively shot using minimum lighting and wide angles, mostly in close-up, Maoz’ script takes the picture a visceral level, where war is assessed purely by the animal reactions of the people exposed to it. Coming after two other successful Israeli war films, Beaufort and Waltz with Bashir, Maoz goes even further in rejecting all political, social or ethical considerations and it is fair to assume that part of the audience might feel seriously alienated by this attitude. But for him, it is a highly personal and intimate portrait of 24 hours in hell, and as such, frighteningly convincing.

The plot never attempts to generate rounded psychological portraits of its protagonists or show them developing throughout the film, but ultimately, this is a bloody page of a private diary far more than a thoughtful reflection on war. A technical tour de force for camera, production designer and editor, uniformly well acted and obsessively directed by a man who is obviously still fighting the demons of his past, this may not qualify as entertainment, in the usual sense of the word, but movies are not always supposed to be fun.