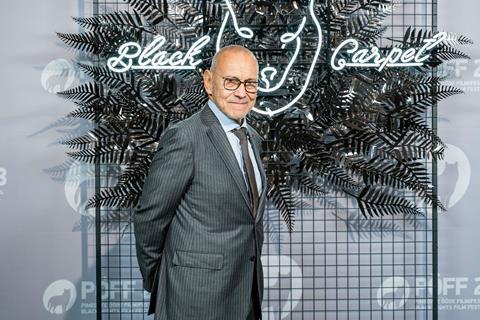 Russian master Andrei Konchalovsky is in Tallinn at the Black Nights International Film Festival to receive a lifetime achievement award for his pleasingly eclectic career. The festival is also be screening his Michelangelo biopic, Sin.

Konchalovsky has one of the most varied filmographies of any director of his generation. He may have co-written Andrei Rublev in 1969 with his friend from film school, Andrei Tarkovsky - but he also went to Hollywood to direct Tango And Cash in 1989 with Sylvester Stallone and Kurt Russell. Before that, he had made Runaway Train, a 1985 action thriller starring Jon Voight, for producers Menahem Golan and Yoram Globus, the maverick Cannon bosses – and early in his career he directed Sergei Bondarchuk in a 1970 version of Uncle Vanya for Soviet state film body Mosfilm.

He invites a comparison with classical music when talking about his filmography. “Composers like Bach and Mozart wrote big symphonic pieces and requiems. Then they wrote sarabands and dances,” says the filmmaker who studied to become a pianist as a young man in Russia. “You can write a novel and then a short story.”

He dismisses the suggestion Sin could be seen as a companion piece to Andrei Rublev, about the celebrated Russian icon painter, simply because it is about Michelangelo. He made Sin, he says, because he wanted to explore “why Michelangelo was so unhappy.”

As for Tarkovsky, who died in 1986, he may be revered as a sacred figure in cinema history but to Konchalovsky, he was also a friend and contemporary.

“We met in film school when we were students,” the director remembers.

They watched western movies together, sharing the same enthusiasm for “great directors like Bunuel and Bergman. At that time, we never thought he would be a myth. For me, it is not very easy to perceive Andrei as a kind of icon. To me, he is a real person.”

Konchalovsky comes from an artistic and aristocratic family. His father Sergey Mikhalkov wrote the lyrics for the Soviet national anthem. His brother Nikita Mikhalkov is a brilliant filmmaker in his own right (an Oscar winner for Burnt By The Sun) and an important producer and power broker with close links to president Vladimir Putin. Konchalovsky remains close to him in spite of the different paths they have taken.

“He’s my brother. He’s my younger brother! I love him as my brother and we have a very good relationship. We might have different ways of perceiving the world but we are very close.”

However he says he is no longer in touch with his old friend, Shirley MacLaine, one of his mentors when he arrived in Hollywood in the early 1980s. “We are so far away. I haven’t heard from her for a long, long time, for 10 years.”

Hollywood in the 1980s had a far richer filmmaking culture than he believes exists there today. Konchalovsky was very friendly with old-timers such as Billy Wilder, who was a mentor to him. (“I became his driver for a while. I drove him around Hollywood.”) He has colourful stories about working with Robert Mitchum on Maria’s Lovers and about Stallone, who wanted at one point to play Puccini. (Studio bosses apparently told the Rocky star “just shut up and take your shirt off.”)

The budgets of films were relatively low by comparison with today’s huge tentpole movies. “That’s important to understand. When a film is getting a heavy budget, there is very little space for a director to be himself,” he says. “After Star Wars, everything turned round. I left. There was no space any more for independent films in Hollywood.”

Now aged in his 80s, Konchalovsky is as busy as ever. He recently directed Verdi’s opera Aida on stage. He also directed a stage adaptation of Ingmar Bergman’s film/TV series Scenes From A Marriage. He is also putting the  finishing touches to yet another new film, Dear Comrades, about the suppression of a demonstration in the south of Russian when Soviet soldiers opened fire on workers.