David Wain, They Came Together

SUNDANCE LONDON: At the European premiere of the rom-com spoof, director David Wain answered questions about the casting, the acrobatic sex scene and ‘that’ grandma moment. 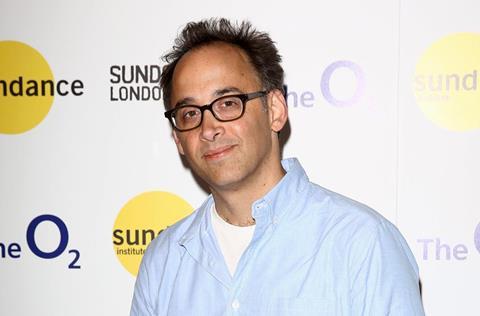 They Came Together, which debuted at the Sundance Film Festival in January, is the latest feature from US comedy writer/director Wain, who has previously made films including Wet Hot American Summer, Role Models and Wanderlust.

The film stars Paul Rudd and Amy Poehler, who tell the story of how they got together to a couple of friends over dinner. But this is no ordinary romance and the film quickly reveals itself to be an R-rated parody of the modern rom-com.

Screened to a packed theatre at Sundance London, Wain said he hope the film would be released in the UK soon, where it is thought to get a late summer release. Lionsgate will release the film in the US on June 27.

After the screening, Wain took questions from the audience…

Could you talk about the casting?

When we first read it out loud at a comedy festival a few years ago in California, Paul and Amy were in this little casual reading we did and came up to me after and said: “We love this, let’s make it”. We shot it several months later. They anchored the cast.

Michael Showalter and I sat down and thought about people from our past collaborations and new people that we were fans of who would be funny for each role. It really was quite simple. We picked our dream cast and most of them were available. Some weren’t and we went to others. Not a lot of auditioning. Mostly asking people we loved that we thought were funny to play the roles.

Did you watch rom-coms before writing it?

We wrote the first draft many years ago. We conceived it as a more mainstream studio, straight-up spoof in the vein of Scary Movie, thinking we had the ability to write something like that. It immediately came out slightly weirder so didn’t get made. But our first draft was thinking about the classic romcoms of the time and how we would do a twist on that.

As we developed it over the years we moved it away from being just a spoof and tried to make it our own strange movie mixed in with homage and spoof. We kept writing and rewriting, which is generally how I work. Just keep going back and rethinking, cutting, adding.

In this particular case, once we finished shooting, we did a lot more rewriting. The framing device of the four people sitting at the restaurant was something we thought of very late in the editing process and rebuilt the movie from scratch around that at the last minute.

Did you have a different ending in mind?

Once we got to shooting, no. We had the ending that we had. When we added the restaurant scene later in the editing, we added the new ending. So we only shot two endings. We may have thought of others but I can’t remember what they are.

What is your favourite scene?

They’re all like children to me. It would be like Sophie’s Choice. I like the bartender scene and the Norah Jones scene. We had many many other scenes. I cut all the ones I didn’t like so the ones left are the ones I like.

I love rom-coms. They’re probably my favourite genre. Tootsie. The Graduate. Crossing Delancey. Every Woody Allen movie. But I like the middling ones just as much as the classics because they’re like comfort food. Like any genre that has a formula but you want that formula. It would find pointing out the formula.

This movie, more than anything I’ve been involved in, is so much about what gets laughs and little else matters even though we tried to tell a story that keeps you interested for an hour and a half on some level. It’s a lot of going up to bat and seeing what sticks. There were jokes that I really believed in but after two or three audiences don’t laugh at all, you have to say: “Okay, I need to get rid of that one.” Showing this for different audiences is a crucial part of the process.

Once we finished the final movie, the audience has basically been at different levels. Some are raucous, drunk and American. Some are more quiet, sedated and British. But I pretty much know where the laughs are. It’s not been the case with other movies I’ve done – so I’m really getting good at this. I’m just kidding.

How do you decide if a project will be a film or a web series?

Usually the decision of conceiving something and what it is happen at the same time. I’ll either have a movie idea, web series idea or TV idea. I work on a series called Children’s Hospital that started as a web series and felt it could be bigger so we turned it into a TV series. The lines are blurring so much these days, I feel everyone watches things on their phone no matter what it is.

Did the actors have any input?

They had some great ideas and I listened to none of them. No. I listen to funny, smart actors many of whom are also writers. But they always come with ideas, either jokes or dialogue or story. I take lots of them. We’ll try several ideas, mining the cast – and the crew – for their thoughts. It’s a big part of the process. A good idea is a good idea no matter where it comes from.

Describe the film in one word

83 minutes? Cute, funny, sweet, chillaxed? They Came Together is three. That’s probably the best I can do.

Where did the ‘grandma scene’ idea come from?

That’s a pretty direct inspiration from a movie called Crossing Delancey with Amy Irving. We tried not to make too many movie references and more general genre. Most of the very direct references are from movies people haven’t seen. Crossing Delancey was one of several romantic comedies that had the wise grandmother and it was one of those ideas that – when we were writing it – seemed quite obvious in what direction it should go.

What New York like another character in this film?

The truth is that we shot most every bit of that movie in a one-block radius in Cobble Hill, Brooklyn. We couldn’t afford to shoot in Manhattan. In the coffee shop scene, if you look carefully, you can see a Clark Street subway sign in the back but that’s in Brooklyn. In one scene, where it’s seen most clearly, we changed it with visual effects to say Upper West Side subway station, which doesn’t exist.

What was the initial framing device?

There was none. In a way, I’m glad it happened the way it did because we were able to see everything and play it with an audience before creating the framing. But it was a more straightforward story with no voiceover or told in flashback. It was told in a very conventional narrative style. By adding this device it allowed me to cut anything I didn’t want to put in, so it was very helpful.

Truthfully, when we first showed this movie to audiences without the restaurant scene, a lot of people came into it as a romantic comedy and didn’t take it on the level it was meant and were like: “Wow, this is banal and simplistic.” The way we have it now, it spoon-feeds the audience to watch it in quotes.

In Joel’s apartment, is that a picture of a can of vegetables on the wall?

That is very observant. That is the can of vegetables from Wet Hot American Summer.

Were there any injuries sustained during the sex scene?

The acrobats in that scene are from a dance company I’ve followed for my whole life called Pilobolus from Vermont. We called them up and said: “Hi, you don’t know who I am but do you have two people who look like Paul Rudd and Cobie Smulders who can do weird sex positions naked?” And they said: “Yeah!”

They came down to the city and boom! It was amazing to watch. There was way more than what we had on screen. We were like: “Okay, we need to move on to the next scene.” But they had a few more.