The Two Popes shows the human side of Benedict and Francis, not just their divine differences. Director Fernando Meirelles tells Screen about guiding the spiritual union. 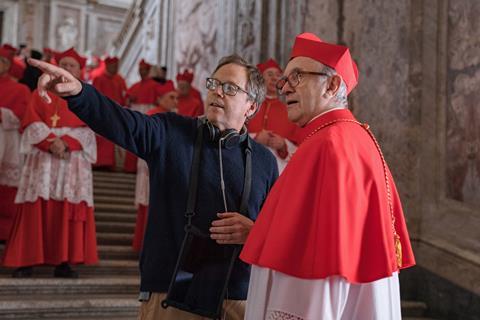 “I knew nothing about the Vatican,” confesses Fernando Meirelles, director of Netflix’s feelgood awards contender The Two Popes, which has captivated festival audiences from Telluride to AFI Fest by way of Toronto, Busan and London, and went on limited theatrical release in the US and UK at the end of November. “I wasn’t very interested in the politics of the Church. I am Catholic, but a very bad Catholic.”

Despite his misgivings, the Brazilian filmmaker says he was hooked when producer Dan Lin of Rideback handed him Anthony McCarten’s script, which imagines a series of conversations taking place in the Vatican in 2012-13 between then Pope Benedict XVI and the man who would become his successor, Argentina’s Cardinal Jorge Bergoglio (later Pope Francis).

“My main reason [in considering the project] was because I really admire Pope Francis, so that was an opportunity to get to know him better,” says the Oscar-nominated director of City Of God. The drama plays out against the backdrop of the Vatileaks corruption scandal and is framed as a joust between two heavy­weight theologians over the future of the Church.

Benedict, the aloof German played by Anthony Hopkins, eventually reveals his desire to do the unthinkable and resign, which he did in 2013. He suggests the affable, progressive Bergoglio, portrayed by Jonathan Pryce in the lead role, would be a good fit for the papacy.

The two men met three times before Bergoglio, who had been critical of Benedict’s tenure before they met, was elected pontiff in 2013. “Of course we don’t know what was said [in the meetings],” says Meirelles, “but that’s the brilliance of the script, because all the lines they say in the film are taken from interviews or books and [are opinions] they actually said.”

Meirelles did not want The Two Popes to become a stuffy account of “two very intelligent men talking”, as he puts it. “I wanted it to be conversational. I think it worked. People can relate to it. And we have this curiosity of knowing these big guys from the inside. I remember watching The Queen and I loved the scenes where you see Tony Blair washing the dishes and this kind of thing, to see their human side. The pizza scene [when Bergoglio recommends they dine on takeaway] wasn’t in the script. I shot it because we needed some very personal and intimate detail.”

We learn that Benedict (who now lives as Emeritus Pope in a monastery within the Vatican) enjoys watching the Austrian TV police procedural Kommissar Rex and is partial to drinking Fanta. For his part Francis loves to eat and indulges his passion for football. “All the details are documented. If they watch the film, they won’t disagree with what the actors say.”

Working with Hopkins — who featured in Meirelles’ 360 in 2011 — and Pryce was an intense pleasure. “They liked each other, always making jokes, going out for dinner,” says the director. “And it helped. You watch the film and feel there’s a connection between them. With these actors, you don’t need to direct much, you just let them do their thing.

“We know Tony’s amazing. People who don’t know Jonathan will know now. He was lucky enough to have the same problem with his knee as the pope. They have the same body size and the same walk, the same spirit.” There was not much by way of rehearsal. “We read two or three times to keep it fresh. The magic really happened on the day.”

The film shot in Argentina and Italy in 2017 and 2018. The Vatican was not involved in the production, so the producers got creative. They replicated parts of the Vatican at Rome’s Cinecitta Studios, including a life-size Sistine Chapel that took two months to build and ended up being five centimetres larger than the original, says Meirelles. They used CGI to create the dome, and the crowd scenes in St Peter’s Square.

The production worked with theological consultants in Italy and Argentina. The Argentinian consultant had been at Bergoglio’s seminary in Buenos Aires and was not a fan. Pope Francis remains a divisive figure in Argentina over his role in the country’s ‘Dirty War’ in the 1970s. Many say he did not do enough to oppose the junta. The Two Popes’ treatment of this subject is even-handed and addressed at length.

As for Benedict, he expresses regret in the film over his silence on the Church’s sex abuse scandal before he became pope. The film does not dwell on the matter, preferring to tell a story about a budding friendship. “What I like is this idea of two guys who [at first] didn’t like each other but had to learn to listen,” says Meirelles. “That was tolerance. Nowadays we don’t like to hear people with whom we disagree. We prefer to kill them.” 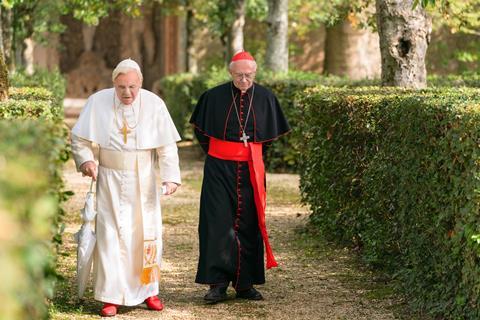 The director says making The Two Popes altered his own preconceived notions. “When I first read the script, Benedict was like the bad guy and Francis was the good guy. As I started reading more and going deeper to understand Benedict, I saw that was not true. They’re not so different in their faith. The way they express their ideas is different, but they’re not so different as I thought. Benedict came out as quite a sympathetic figure, thanks to Tony as well. At first he was more black and white but he has a lot of grey areas. I read some of his writings and he has a point.”

The conversation turns to political division in Brazil, and the refusal by far-right leader Jair Bolsonaro, whom Meirelles calls “a moron”, to heed scientists’ warnings about the fires that have devoured swathes of the Amazon. When Pope Francis addressed climate change in his encyclical (a papal communication), Meirelles notes he based his writings on science, in stark contrast to climate-change deniers like Bolsonaro and Donald Trump. “So the guy who believes listens to science; the guys who should be rational write according to their beliefs. It’s so ironic.”

Meirelles will reunite with Netflix on his next feature, although precisely what this will be remained unclear at time of writing. He is collaborating with his City Of God screenwriter Braulio Mantovani on a climate crisis drama that he hopes to shoot next year, and is also filming a documentary about soil.

The Two Popes debuts on Netflix on December 20 and the platform clearly suits him. “This is a way to get lots of people to see your film. It gets some play in theatres and then it goes on the platform. Everything has changed. There’s no way back.”