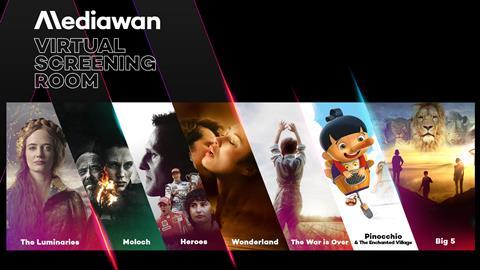 The launch is a proactive and speedy response to the challenging marketplace caused by the Covid-19 global pandemic that has pushed traditional market meet-and-greets and festivals online to become virtual online events. The platform has a dedicated portal found at http://screenings.mediawan.com.

“With no prospect of any physical events in sight due to the current health context, we needed a new, innovative way to introduce our top programmes to our partners and re-create some of the intimacy of these exclusive one-on-one screenings,” explains Valérie Vleeschhouwer, managing director of Mediawan Rights.

As one of Europe’s biggest independent audiovisual content platforms, Mediawan’s fresh offering provides a destination platform for buyers eyeing the myriad flagship programmes produced or distributed by the company.

There will also be premium documentaries available such as Heroes, and also Kubrick By Kubrick and Banksy Most Wanted, both part of the 2020 Tribeca festival selection. Buyers will also be able to discover projects including Pinocchio & the Enchanted Village, a 13-episode, 52-minute animated series in production by ON Kids & Family, and Big Five, an English-language series (10 26-minute episodes) and 90-minute TV special in development, to be directed by Gilles de Maistre.

Mediawan Rights is one of France’s biggest players in international distribution and co-production of content. With a diversified catalogue of more than 13,000 hours of programs and agreements with all the major international players, Mediawan Rights is a key partner for all major producers and broadcasters, linear or non-linear, globally.

The programmes in the screening room:

MediawanCreated in late 2015 by Pierre-Antoine Capton, Xavier Niel and Matthieu Pigasse, Mediawan is one of the main independent European studios producing premium content.