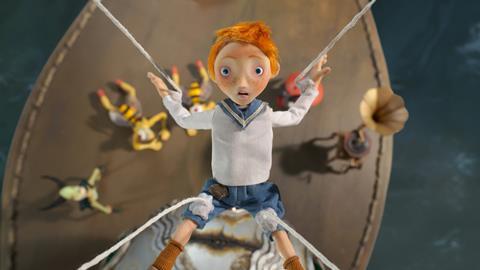 France, the UK and Spain may be Europe’s leading animation production hubs, but animation studios from Central and Eastern Europe (CEE) have greater numbers of feature films in development or production than five years ago.

Slovakia, for example, has five animated features at various stages of production whereas it produced only two between 2010 and 2014, according to a study by the European Audiovisual Observatory.

“Producers are feeling strong enough to tackle very ambitious projects, which for me is the sign of a growing industry,” says Slovak producer Juraj Krasnohorsky of Bratislava-based Artichoke.

The last two years have seen international co-productions with substantial input from the region win major awards. The world’s first fully painted feature Loving Vincent won the European animated feature film award in 2017 at the European Film Awards (EFA) and received an Oscar nomination in 2018. Raul de la Fuente and Damian Nenow’s Another Day Of Life also took home the EFA statuette in that category, and Slovenia-born visual artist Milorad Krstic made an unforgettable impression in a midnight screening at Locarno with his feature debut, art-heist fantasy Ruben Brandt, Collector. It was acquired by Sony Pictures Classics for North America and Latin America.

At the same time, animation made in Central and Eastern Europe is reaching the global cinema audience: Czech producer/director Martin Kotik’s Harvie And The Magic Museum was sold by Planet Nemo to 90 territories, while the first Ukrainian animated feature specifically made for international distribution — Animagrad’s The Stolen Princess — was pre-sold to more than 50 territories and opened on more than 4,500 screens in China at the beginning of this year.

As elsewhere in Europe, “kids’ content is predominant”, Krasnohorsky notes. His company is involved in family film Of Unwanted Things And People with partners from the Czech Republic, Poland and Slovenia and four directors from the respective countries. He is also a co-producer on the Hungarian sci-fi dystopian drama White Plastic Sky, which is aimed at young adults.

Artichoke is one of a number of production houses across the region expanding its portfolio to include animation alongside live-action output. Czech company Negativ is working with Michaela Pavlatova on her animated feature debut My Sunny Maad, and Latvia’s Locomotive Productions entered the sector when it took on part of the animation for Signe Baumane’s feature project My Love Affair With Marriage.

“When I was doing the research for [2011 debut animation feature] Crulic — The Path To Beyond, I realised the only way I could tell the story was as animation,” Damian recalls. “And since there is no tradition of animation in Romania, I put my own team together. They didn’t have any background in animation as they graduated from university in art or sculpture, but it meant we had a freedom in our work and were not bound by any constraints on our approach to the style of animation.”

Finding co-production partners to raise the budgets and share out the work on their projects is as important for CEE animation studios as elsewhere in Europe, particularly given the comparatively limited resources available in these low-capacity production countries.

The $11.3m (¤10m) budget for Estonia’s stop-motion children’s film Captain Morten And The Spider Queen, for example, was put together by attracting co-producers from Ireland, the UK and Belgium, while Czech companies Fresh Films and Hausboot Production found partners in neighbouring Slovakia, Poland and France for the literary adaptation Even Mice Belong In Heaven. Furthermore, Damian has collaborated with France’s Sacrebleu Productions and Belgium’s Minds Meet for the financing and animation of Marona’s Fantastic Tale.

CEE animation studios are also serving as minority co-producers on features by their western colleagues. Czech studio Maur Film is working with Germany on Fritzi: A Revolutionary Tale and with France on Florence Miailhe’s The Crossing. Hungary’s CUB Animation has teamed up with Irish producer/director Alan Holly’s planned Piece, which is aimed at young adults.

Moreover, the Polish Film Institute has said the recently launched cash rebate scheme will reserve at least 10% of its annual budget of $53m (¤47.6m) for animated productions, while growth in the local animation sector in Estonia has prompted the Estonian Film Institute to appoint its first animation film commissioner — Peep Pedmanson — at the beginning of 2019.

Young animation professionals from the region are developing their projects and building up an international network thanks to the CEE Animation platform with its year-long workshops, annual pitching forum and access to market initiatives supported by the EU’s Creative Europe MEDIA Programme.

“Training programmes throughout the region have usually tended to concentrate on fiction feature film and documentary production,” says CEE Animation co-organiser Marta Jallageas. “So our CEE Animation workshops were set up with the specific priority of giving animation producers from low-capacity production countries an opportunity to learn about script development, production, marketing and distribution for animation projects. Our initiative has brought the newcomers together with producers more experienced in the market and given them confidence and the chance to build up a network.”