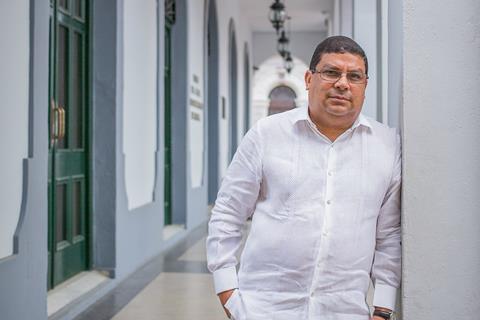 Born Alfonso Teofilo Brown in the Panamanian town of Colón, Brown emigrated to the US where he become a tireless world champion who travelled the globe defending his title, befriended celebrated cultural icons in Paris, and eventually died in poverty in 1951 aged

Navarro recounts the chapters of Brown’s extraordinary life, and examines his significance in Panama’s complicated cultural and racial history.

The filmmaker also reveals he is lining up a fictional version of Panama Al Brown’s life that his brother Ricardo Aguilar Navarro (Salsipuedes) is set to direct.

What is the film about?
The picture is about the first boxing world champion from Iberoamerica, in 1929. Panama has had about 30 world champions and the story of Panama Al Brown – of course the first Panamanian boxing champion also – is where the history of boxing in Panama begins.

It’s a fascinating story. He emigrated from Panama to New York in 1923 [in an effort to further his boxing career] and eventually became world champion. He then moved to Paris, where he became friends with intellectuals and artists of the time like Pablo Picasso, Salvador Dali, Ernest Hemingway, William Faulkner, and Coco Chanel.

What happened after he lost his boxing crown?
After he was defeated he decided to retire from boxing and performed at cabarets in Paris. At one of these shows he met Jean Cocteau and they became a couple. Cocteau helped him get back his enthusiasm and return to boxing. Coco Chanel loaned her estate on the outskirts of Paris so he could train.

Did he reclaim his world title?
Historically it isn’t clear. But all that is just one little part of the story… the film also talks about Panama’s culture, history and identity.’

What inspired you to tell the story?
In 1992 when I was studying film in Havana, my mother would send me newspaper clippings so I knew what was going on in Panama. One of them was about Panama Al Brown’s story. I became curious to learn more and when I returned to Panama in 1998, I read a supplement [Talingo] in our national newspaper La Prensa. It contained excerpts from a biography of Panama Al Brown by a Spaniard called Eduardo Arroyo. I started a fictional version of the screenplay, but realised to recreate New York and Paris and Panama in the 1920s ands 1930s would not be ideal. I didn’t have the funds and in 2012 decided to make it into a documentary. We flew to New York, Paris, Madrid and Valencia, and got hold of archival material. In November last year we finished post and it was very important to wait and launch it at the festival. This has always been my dream.

Why did you go to Valencia?
That is where he lost his crown. He used to drink champagne in the corner of the ring in between rounds. When he lost the championship in 1935 there’s a theory that his champagne was poisoned. I went to meet the Valencia boxing federation and we include their version of events in the documentary, as well as those of Panamanian boxing experts such as Juan Carlos Tapia.

How was the film funded?
The early fictional version of the screenplay was funded by Cinergia, an important Costa Rican fund for central American cinema. The documentary screenplay received funding from Ibermedia, and we also partnered with Telemetro (Panamanian broadcaster). Last year we won the Fondo Cine award for post-production from the Panamanian ministry of commerce and industry. And the rest comes from me and my family. My wife is an executive producer.

What are you doing next?
My brother Ricardo [Aguilar Navarro] directed Salsipuedes, which was in the festival two years ago, and he will direct the fictional version of Panama Al Brown’s story. I will produce. My other project is a documentary about the Cuara a Cuara kiosks in Panama City [whose merchants have been told they must relocate and pay higher rent.] I follow four of the families that worked there.