Five months after Tang Media Partners took a 60% stake in IM Global, Stuart Ford and Donald Tang tell Jeremy Kay about their ambitions for the company to become a world leader in content creation and licensing. 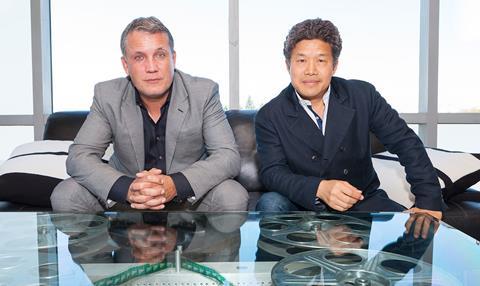 Away from the eruption of announcements on new partnerships between China and Hollywood at last year’s AFM, Stuart Ford and Donald Tang had begun a discreet dialogue. It was a year after IM Global founder and CEO Ford first met Tang, the Los Angeles-based head of Tang Media Partners (TMP) and former Bear Stearns vice chairman who had advised AMC Entertainment on the $2.6bn acquisition by Dalian Wanda in 2012.

The men had got to know each other through mutual acquaintances at Huayi Bros and spotted an opportunity. They signed a deal memo in December, triggering five months of due diligence that resulted in the announcement last June that TMP had acquired a majority stake in IM Global. Tang bought a 60% stake in the entertainment company and became executive chairman of the board after previous majority owner Reliance Entertainment scaled back from its 70% share to match Ford on 20% apiece. The deal, coupled with a separate transaction that saw TMP and Chinese tech giant Tencent invest in IM Global Television, was worth around $200m.

While sources have suggested that in light of these developments, IM Global is valued at around $300m — a figure Ford will neither confirm nor deny — it would be missing the point to assume this is a get-rich-quick enterprise in the manner that has characterised certain other China-Hollywood associations.

“When we first started talking, Donald and I and our respective teams had lengthy conceptual discussions about where we wanted to take the business,” Ford says during an interview with Tang at IM Global’s West Hollywood offices. “We [talked about what] TMP is doing on a broader level and how to have a very clear plan to become a global content creation and licensing player that’s equally active and recognised in North America, China and internationally. We had that strategy established before we got into any material negotiation financially.

“It’s a roadmap that has enabled us even in the three or four months since we announced the deal to make a huge amount of progress on many fronts including film financing, scripted TV deficit financing, unscripted TV production and our Beijing operations, including the launch of the Go Global [marketing and PR] business.”

The relationship with TMP and its high-level Chinese investors such as Tencent, Huayi Brothers, Sequoia Capital and China Media Capital gives IM Global myriad options to generate and exploit content across multiple platforms around the world. Tang saw in IM Global an investment opportunity in a well connected, scalable business that was willing to make smart bets on personnel, partners, content and, more broadly, where the entertainment business was headed. “Stuart had a reputation for being a disciplined businessman in a creative community and I don’t know anybody better at that balancing act,” says Tang. “So Stuart will continue to do what he does and we will do what we can to assist.”

“One of the great things about Donald and his team is they’re an LA company day in and day out, so Donald has an extremely high level of relationships right across Hollywood,” says Ford. “So there’s huge added value for us as a search engine for content, quite separately from whatever corporate or corporate financial benefits come from the relationship. On the feature-film side, we brought Greg Shapiro [the Oscar-winning producer of The Hurt Locker] on board as head of production a month or so ago, which was a big ‘get’. We anticipate making half a dozen films next year under Greg’s supervision and TMP are working very hard with us on sourcing projects.”

IM Global might introduce the first Shapiro projects in Berlin. However, it will commence sales in Santa Monica on The Adventurers starring Jean Reno and Andy Lau. The Chinese and English-language action film hails from Flagship Entertainment, the joint venture established by Warner Bros, China Media Capital and Hong Kong broadcaster TVB.

For the TV operation run by Mark Stern, former president of original content at Syfy, IM Global is lining up a handful of high-profile scripted shows backed by its $100m dedicated slate fund established through investment by Tencent in the Chinese giant’s first production deal outside Asia. It will also serve as deficit financier on select third-party series. IM Global Television has just closed a first-look deal with multi-hyphenate genre guru David Goyer and is poised to unveil a big push into unscripted TV production in the US and China with what Ford refers to as “an A-level US unscripted partner”.

If there is the sense everything is coming together quickly, it is the fruition of a strategy that saw Ford make frequent trips to the Far East several years ago, before he opened a Beijing office in 2013. He has gone on the record before to say his goal was the longer play and not solely money or distribution. “The key word is we wanted to be relevant,” he says. “We did that by bringing something to the table that there’s a shortage of in China, which is real know-how and infrastructure in exporting and monetising Chinese-language content internationally.”

Patience led to strong corporate ties with the likes of Huayi, Wanda, Enlight, China Film Group and Village Roadshow. The sales operation began licensing Chinese-language films around the world, scoring notable hits on The Mermaid, Mojin: The Lost Legend and Mr. Six. According to Ford, the Chinese sales slate has been profitable “pretty much from the get-go”, adding that while it was targeted initially at non-Chinese-language speakers, the rising number of commercial films of all genres from China has signalled a change. “The target is Chinese speakers, of which there are tens of millions across the world, if not hundreds of millions,” he says. “So we’ve tailored our sales strategy to try to get the big Chinese films.”

Word travels fast, which means international digital distribution of Chinese films pegged as closely as possible to the release date in China increasingly looks like the way to go. “Looking forward a few years,” says Ford, “the broader trend I see for the independent film distribution sector is probably the way Amazon, a digital platform and an all-rights buyer, is outsourcing US theatrical releasing duties on bigger titles to independent distribution companies. It’s a model we’re going to see more and more internationally too.

“This goes to the heart of how IM Global is expanding under TMP,” he adds. “The end user for us as a content creator, licensor and aggregator is increasingly becoming the digital universe.”

It is early days to talk about production, financing and local distribution of Chinese content, although Ford says IM Global and its partners will “absolutely” get involved at some point. Meanwhile, he and Tang insist the China-Hollywood inflection of IM Global ownership these days is not indicative of an exclusive focus on the Far East.

Ford cites the “phenomenal level of output” at Mundial, the Latin American joint sales venture set up with Mexico’s Canana, as well as the emphasis on film and increasingly TV from all over the world. “We’re an international company,” he says, “and the Chinese influence in terms of taste and relevance plays into that, but it doesn’t define it.”

What does Tang think about the notion voiced in some quarters that China will abandon Hollywood once it has absorbed its storytelling nous? “Whoever says that is short-changing [Hollywood’s] core competency,” he says. “Content creation in Hollywood is not easy to learn; it is ingrained in a culture, in an education system. Look at the showrunner culture in TV. It’s an American phenomenon.”

As for calls by US Congressmen for a review into ownership of US entertainment assets, Tang is stoic. “Hollywood is the most democratic forum of people’s expression of thoughts and ideas,” he says. “Nobody does it better than Hollywood, so if the entire world wanted to learn that skillset, why is that bad?”

The leading lights in China’s media, technology and entertainment sectors move quickly because, Tang notes, there are few legacy businesses holding them back. They are eager to learn, share and make lasting friendships — but beware inefficiencies. “Everything about Hollywood is great except for the business model,” says Tang. “If the model is not somehow changed or improved, it’s going to be a problem and the Chinese will leave, because nobody wants to invest money and not see a return.”

He knows there is hard work ahead but the early signs have been encouraging and it can be fun. Why else would he invest in a Hollywood company? “I don’t have a secret formula,” says Tang. “What Hollywood possesses is the storytelling magic. American and Chinese cultures are cultures of pragmatic business. There are no cultures more alike than Americans and Chinese.”