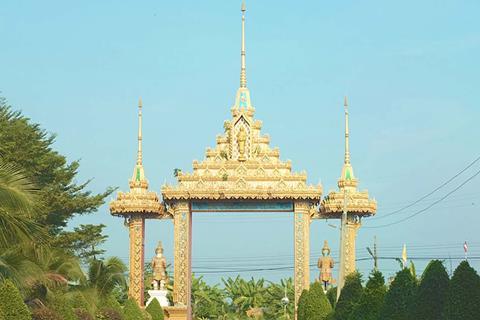 Dir. Sompot Chidgasornpongse
Prod co. Kick The Machine Films
Based on his personal experiences, Thai director Sompot reimagines a day trip that sees his extended family travel to nine temples and make offerings to their dying grandmother. “I want to capture the nuanced dynamics of the various family members who bear different religious or political viewpoints, although they should be under the same influences of traditional Thai culture,” Sompot says of his debut narrative feature, which is set in his hometown of Samut Prakan. The project has received funding from Thailand’s Ministry of Culture, Thailand Media Fund and Talents Tokyo, with Kissada Kamyoung and Palme d’Or winner Apichatpong Weerasethakul producing. Sompot has previously been first assistant director on Apichatpong’s projects including Memoria, which won the Jury Prize at this year’s Cannes Film Festival.
Contact: Kissada Kamyoung, producer

The Beer Girl In Yangon (My-Indo-Phil)

Dir. Sein Lyan Tun
Prod cos. PS Films Production, One Big Fight Production
Sein Lyan Tun’s first narrative feature is drawn from the experience of the Burmese director working in pubs to support his family when he was only 13 years old. “This film is about the fragile journey into adulthood, family issues and bad romances,” he says of the project, which has received a script development grant from Talents Tokyo and a post-production prize from Myanmar Script Fund. Sein Lyan Tun has directed several short documentaries including 2016’s Unsilent Potato and 2019’s For Me And Others Like Me, which was co-produced by NHK Japan. Producing credits for Indonesia-based John Badalu include Malila: The Farewell Flower and What They Don’t Talk About When They Talk About Love, both of which screened at Locarno.
Contact: John Badalu, producer

Dir. Duong Dieu Linh
Prod cos. Momo Film, An Nam Productions, Widewall Pictures
After winning Locarno’s Moulin d’Andé–CECI screenwriting residency award in 2019, Vietnamese director Duong returns to Open Doors with her Hanoi-set dark comedy about a housewife who tries to voodoo her husband back into love. “It won’t be another angry film where women are the victims of men,” Duong says. “I want to create a vibrant world in which my characters work hard to find a way out and even resort to absurd methods.” Duong has completed a series of shorts about middle-aged women, including Mother, Daughter, Dreams and A Trip To Heaven, selected in Leopards of Tomorrow 2020. Singapore-based producer Tan Si En is behind Wet Season and Anthony Chen’s segment of Cannes omnibus The Year Of The Everlasting Storm. Vietnam-based Tran Thi Bich Ngoc’s producing credits include Big Father, Small Father And Other Stories.
Contact: Tan Si En, producer

Dir. Luhki Herwanayogi
Prod co. Catchlight Pictures
Indonesian director Herwanayogi developed his debut feature Our Son at Busan Asian Film School in 2019, where it was selected as best Southeast Asian project and received a Purin Pictures award grant. Set in Yogyakarta, the story follows the complicated relationship of two couples; when the men leave, the women decide to form a new family together, which raises a few eyebrows in conservative Indo­nesian society. “I hope the film will make society understand we don’t have the right to pass quick judgment. Everyone has their own problems and we need to accept their life decisions,” says Herwana­yogi, who has directed several shorts including On Friday Noon, which was in Locarno last year, and HAR, a best short film nominee at Indonesia Film Festival in 2018. Both were produced by Catchlight Pictures, the Yogyakarta-based production company he co-owns with Iqbal Hamdan.
Contact: Luhki Herwanayogi, director/producer

Dir. E Del Mundo
Prod cos. Create Cinema, iLong Productions
Del Mundo has chosen intense subject matter for her debut feature, which recounts mass killings in the Philippines’ Maguindanao province on a single day in November 2009. It is seen through the eyes of a 19-year-old woman, who is determined to shelter a lone survivor. “This is the first depiction of the Maguindanao Massacre on film. It is about moral injury as the protagonist explores the consequences of her choices,” says the director, who intends to film in Super 16mm. Previously titled Thanatos, the project won the DPC II Award at TorinoFilmLab in 2018. Del Mundo’s short Man Of Pa’Aling, which screened in Locarno last year, was awarded the best director prize at Cinemalaya Philippine Independent Film Festival and a jury prize at Fribourg International Film Festival. Producer Pamela L Reyes has produced films for Filipino filmmaker Mikhail Red, including Neomanila and Birdshot.
Contact: Pamela L Reyes, producer

Dir. Ratchapoom Boonbunchachoke
Prod co. 185 Films
Ratchapoom’s Red Aninsri; Or, Tiptoeing On The Still Trembling Berlin Wall won the Cinema & Gioventu award for best international short film in Locarno’s Leopards of Tomorrow 2020 competition. His debut feature is set amid an air pollution crisis, and follows a woman who died of respiratory disease returning to haunt her household’s vacuum cleaner. “Thailand has a lot of ghost stories. Instead of playing on the scare factor, I’m looking at ghosts from a socio-political-ecological perspective, with a touch of satirical humour,” says the Thai director. The film was named most promising project at Singapore International Film Festival’s Southeast Asian Film Lab in 2017, and received a prize at Bangkok Asean Film Festival’s Seapitch in 2020. Producer Cattleya Paosrijaroen, an Open Doors Lab alumna in 2019, is co-founder of Bangkok-based 185 Films. Her producing credits include Ten Years Thailand and The Edge Of Daybreak.
Contact: Cattleya Paosrijaroen, producer

Dir. Ikhbayar Urchuud Prod co No Wonder Films
Set in the Mongolian capital of Ulaanbaatar, Ikhbayar’s first narrative feature is about an alcoholic father who attempts to reconcile with his ex-wife and their suicidal son after the death of their young daughter. “The idea stemmed from my experience as a teenager when I lost my grandmother,” says the director. “I suspect I had depression, but coping with grief is an issue largely ignored in Mongolia. I hope my film can help people overcome their pain and open up to their emotional states.” Ikhbayar has directed several short films and documentaries such as The Will To Art, which was screened in FIDMarseille, and is also co-founder of the Mongolian Film Institute. Producer Nomintuya Baasankhuu is the creative producer of Mongolia’s nationwide arts programme Arts Network.
Contact: Nomintuya Baasankhuu, producer

Dir. Le Binh Giang
Prod cos. DNY Productions, Margo Films
Le’s debut feature KFC played Rotterdam and New York Asian Film Festival in 2017. His latest project is about a policeman who plans to marry his girlfriend, but religion, family and a murder case get in the way. “We will film in Bac Loc during the rainy season to create a mushy feeling, which reflects the emotional struggles of the characters,” says the Vietnamese director. The project received an ArteKino award at Busan’s Asian Project Market last year. Producer Le Quynh Anh — an Open Doors Lab alumna in 2019 — has credits include Inside The Yellow Cocoon Shell, which was selected for Open Doors Hub 2020 and picked up the Open Doors Development Award, while Singapore-based Panuksmi Hardjowirogo is a producer of Jakrawal Nilthamrong’s Anatomy Of Time.
Contact: Le Quynh Anh, producer