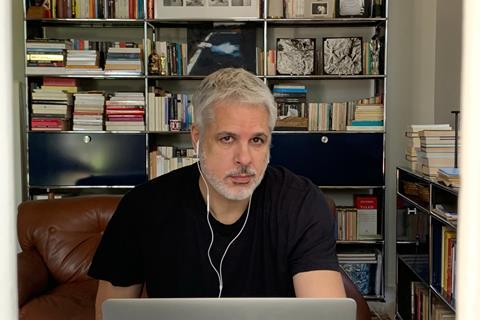 Schortcut Films, which he founded in 2016 to focus on ambitious international co-productions, was a co-producer on Elia Suleiman’s It Must Be Heaven, Massoud Bakhshi’s Yalda, A Night For Forgiveness and Moroccan comedy drama The Unknown Saint.

Prior to the coronavirus pandemic, which saw Lebanon lockdown on March 12, the country was in the grip of a deep economic crisis accompanied by street protests against decades of misgovernance of the country.

What is the situation in Beirut?
Only pharmacies and food shops are open. With my wife and children, we don’t go out and take minimum risks. We spend time with two couples, our neighbours, who aren’t going out either. We’re living the lockdown together.

Is it business as usual for you and your team as you all work remotely home? Covid-19 comes on the back of an already complex time for Lebanon.
The revolution in October and the financial crisis was the first challenge that pushed us to reinvent ourselves and restructure how we worked. The pandemic adds an extra layer. We’re trying to advance our projects in development, using the extra time we have on our hands to support our directors in the writing process.

How are you maintaining an office routine?
We hold two video conference meetings a week with the core team, at which we take key decisions and set the goals, and also have a WhatsApp group for each of our productions. Then there are the inevitable emails that never stop.

Which systems are you using to talk to one another and other contacts?
Skype and Houseparty when there are lots of us, and sometimes Zoom.

How are you and your colleagues keeping up team morale?
We’re a resilient bunch even if we have low moments. This May, we’ll have been working together for 10 years and in that time we’ve overcome quite a few obstacles in a country where it’s always been a struggle to make films. Whenever one of us is particularly low, the other rallies round to cheer them up.

Do you have productions that were due to shoot or in the final stages of post-production?
Thankfully, we finished the shoot for Ely Dagher’s film Harvest just as the first case of Covid-19 was reported in Lebanon. It would have been disastrous for us to interrupt the shoot. It’s a co-production with Andolfi in France, Wrong Men in Belgium and Beachside in the US. We can’t start post-production because it is scheduled to take place between France and Belgium.

Joana Hadjithomas and Khalil Joreige’s Memory Box, which is one of our most ambitious projects to date, was close to completing post-production. It’s a co-production with Haut et Court in France and Microscope in Canada. We also have two documentaries, one by Nadim Mishlawi, the other by Corine Shawi, for which the post-production has also stopped for now.

Abbout Productions has been sharing some of its productions like A Time To Rest and Lebanon Factory for free online, what’s the thinking behind this?
Our producer Myriam Sassine suggested it and I immediately approved. We’ve been wanting to share these works for a while as we get a lot of requests because they can be difficult to find but have never done so because they are still being exploited commercially and we count on this revenue to survive. The fact the world stopped gave us the courage to go ahead. Most of our distributors and sales agents have proven flexible at the moment, allowing us to put the films up for a limited time.

The pandemic has stopped a lot of key industry meetings for the Arab world including Qumra in Doha and the Beirut Cinema Days. Are you missing these events?
Qumra went online which allowed the projects to at least benefit from consulting sessions and a few contact meetings. Beirut Cinema Days was cancelled which is a shame. Losing one edition is not the end of the world. The important thing is that we don’t lose these initiatives forever.

What advice would you give to people in the business who are worried about the future?
It’s an opportunity to think, press the reset button and evaluate the past to better rebound in the future. This situation will test the robustness and pertinence of our projects, initiatives and collaborations. When the unexpected happens, you need to know how to interpret it and transform it into something positive.

What contingency plans are you making for the next few months?
We’re trying to do everything that we can under these conditions so that we’re ready to start up immediately when things return to normal. We have projects that we’re hoping to shoot at the end of the year.

If you have children, how are you managing keeping them entertained/educated during the lockdown?
I have two older children. One is studying for his Baccalaureate; the other is a football fan and is suffocating. I’m teaching him to drive on the deserted streets.

What are you watching, reading and listening to get you through this time?
I’ve set myself the challenge of reading all the classics that I’ve never had the time or energy to read, such as Ayn Rand’s Atlas Shrugged, Dostoevsky’s The Idiot and Herman Melville’s Moby Dick. I’m doing the same thing with film, exploring the works of Godard, Kiarostami, Kubrick. I’ve also started participating in online chess tournaments. I’ve never had the time before. I’m even doing an hour of sport, which is a miracle!

Is there any positive change this situation might bring to the industry?
The love and encouragement we’ve been receiving since we put our films online for free shows how they have a value, even in times of crisis. But it’s certain that the film industry will never be the same again. Funding is going to impacted and the role of festivals is also going to questioned. Do we really need to travel so much to make independent films? Are international co-productions going to still be possible? These are the sorts of questions I am asking myself.