My Working From Home Life: US director Catherine Hardwicke 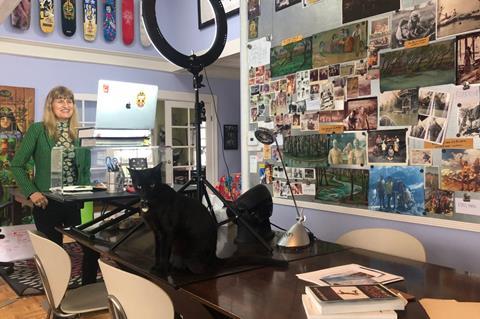 US director Catherine Hardwicke has earned a global reputation for directing films including YA smash Twilight, Thirteen and Lords Of Dogtown.

After years exploring coming-of-age stories through features, Hardwicke has turned her talents to the short-form with new Quibi show Don’t Look Deeper, which launches on the platform today (July 27).

Rising star Helena Howard, best known for Madeline’s Madeline, plays a high school student who can’t shake the feeling something about her isn’t quite right. Emily Mortimer and Don Cheadle also star in the 14-episode series.

Hardwicke, who also served as executive producer on the show, talks about what drew her to the show, staying motivated during the pandemic, the recent Black Lives Matter protests in Los Angeles, and what she has coming up. She lives in Venice Beach, California.

What was your daily routine during the lockdown and later the Black Lives Matter protests?
I’ve got all my masks and I made them and have been diligent about that and social distancing, but have been going out on bike rides up in the mountains and getting a lot of exercise working in the garden, planting more seeds and food. And then also I’ve been working for almost 10 hours every day because it’s still been quite busy.

On one level people are pitching TV shows so writers and producers are connecting with me asking if I want to be part of a project and then we’ll create a look book and Zoom pitch it out. I’ve also been working with the writers and I’ve developing a couple of screen several screenplays and one animated project. It’s all hopeful. You hope some of it can go, and just keep busy.

Have you been on lots of Zoom calls?
Oh, so many Zooms. Zoom is great because you can do the screen share and show all the visuals. So I’ve kept my assistant on – she’s staying down in Orange County – and we’ve been able to work very well, making look books and Photoshopping over Zoom and art directing things and researching, so it’s been pretty positive in that way. 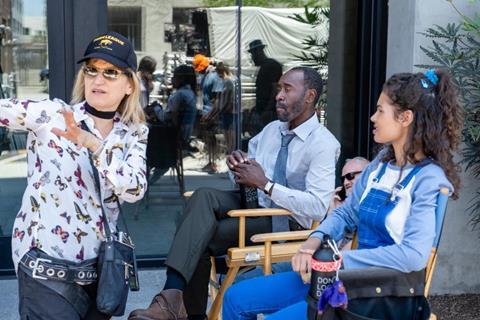 How did you get involved on Don’t Look Deeper?
It was kind of cool because the script was sent to me and I was immediately drawn in – it was a page-turner. I was shocked, surprised, intrigued by where this story was going. I loved it. And then I thought that the characters were very layered and complex, the three main characters.

It’s known that I love coming-of-age stories like Thirteen, where a person is seeking their identity, going through all their teen angst, or in this case I would say identity anger. This character [Helena Howard] clearly has been fitting in, and suddenly she’s not what she thought she was so I thought that was just an amazing emotional arc. Plus it’s playing with memory and loss of memory and you get to work in a cool non-linear fashion where we’re reloading, uploading memories and things and she’s discovering more pieces of her life. Fascinating.

I love Emily Mortimer’s character, the scientist: someone who just believes in a project so much they might not see what overall effect it might have – and that whole struggle between technology and humanity.

How did the Quibi format influence the storytelling?
Well, it directly impacted it on multiple levels. There’s a technical side of dealing with a vertical and horizontal composition – that’s a whole other thing. And then just the idea that each chapter cannot be one frame longer than 10 minutes – that forces a whole very cool economy of storytelling where you’re learning how to draw people in quickly at the beginning of the episode and then end it in a way where there’s a pivot point or a revelation or something that makes you say, I need to finish this, I want to know what happens.

Episodic TV does that but not in such a condensed amount of time.  It’s a new way of thinking.

Coming back to the vertical and horizontal alignment, how did that work? Did you have to plan different set-ups for each shot?
Oh my god. OK well at first we really had the budget and schedule to just shoot everything once, normal style. Even then of course, like all directors, we kind of pushed that as our eyes are bigger than our stomachs, more than what we could afford to do. Quibi was really cool. They had us test a short film. They had me write a little short film and test all different methods of shooting it. We edited and we showed it to them and they tested on their platform.

My cinematographer and I decided to shoot it all in a landscape format and then in the editing room the editor and I recomposed the vertical with the footage we had, often changing shots to a different camera. But we couldn’t change the sound because the sound had to be continuous flow. If you did decide in the middle of a word or sentence to rotate your phone to get a close-up in vertical, it had to flow and the sound had to match. So that was another level of trickiness because each actor wouldn’t say the line exactly the same way so we had to work around all that.

What do you have coming up?
Heathen – it’s a fun project based on a graphic novel and that’s with [German producer-distributor] Constantin.

What have you been watching recently and during lockdown?
Out of the gate everyone had to do Tiger King, four seasons of Money Heist, other things in the conversation. Every night I’m watching something.

How are you keeping your children occupied while you are working from home?
My children are two black cats and they are just being entertained the same old way they always do – sleeping 15 hours a day.

What’s most surprised you about yourself during this lockdown?
There’s the rollercoaster of emotions. You’re trying to stay optimistic, creative, positive, and searching for what’s the right thing to do and trying to be helpful for the greater good, but still stay safe. It’s been a rollercoaster.

What’s the mood of the industry among the people you’re in contact with?
I’ve actually been around people that are pretty optimistic, and are literally just putting their heads down and working and trying to create future products that will be ready: all the different executives that we’ve pitched to and the different producers and writers that I’m working with… It’s an industry full of creative people that like to work so we’re trying to find cool things to do and stay positive.

What’s the first thing you think you might do when the when the lockdown lifts?
Well, I always like to travel. I miss seeing new places and going new places. I’d be happy to do a little travelling.