Richard Linklater’s Silver Bear winner Boyhood has been 12 years in the making. 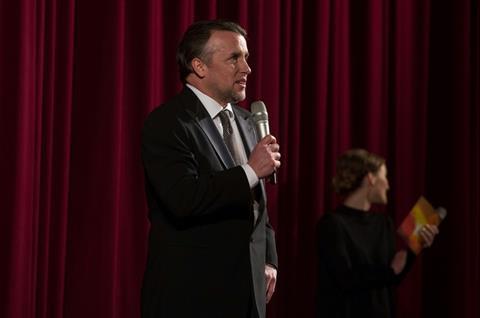 At his Berlin press conference, Linklater remembered that he started production on Boyhood “over 4,200 days ago…I remember what the hell we were getting ourselves into.”

The film, which follows the life of Mason from age 5 to 18, had careful preparation.

He had the architecture of the whole piece in mind from the start but, every year, he and his crew had the gestation period of one year to think about each segment, which varied between 18 and nine months, filming “roughly once a year”.

He noted that with the preparation of the shooting every year “there’s so much time put in the preparation… we did all that 12 times instead of once.”

With the casting and the editing they ultimately spent “about a year, two years in pre-production, two years in post-production… so I would say I worked several months a year on it” adding that it is “a lot more than you would spend on a usual indie” but that we also have to consider the fact that they made other films during this period.

With Boyhood he wanted to show a normal family in everyday life during those 12 years without however depicting the biggest moments that we have seen in every other coming-of-age films. He avoided those moments when “you lose your virginity, your first kiss… that wasn’t this movie”.

He underlined the importance of the small moments of life as “that’s the last line that Ellar [Coltrane] says…that’s always right now, that’s kind of the message we all go through our lives struggling with”.

Linklater said he remembers being a young person and the fact that everything he got from the culture and his parents was really about his future “childhood’s to be enjoyed, but you’re groomed for something else that you don’t even know what it is”.

Cast and crew’s lives also changed personally during the 12-year process. Patricia Arquette had a child and got married and divorced; Linklater had two more children; they “fought cancer and both buried parents”.

For Linklater, a lot in this film is a “portrait of the kids growing up but it’s also adults kind of bumbling through parenthood and it was kind of what it was about also”.

For Ellar Coltrane, shooting for 12 years did not change his childhood at all, it did almost the opposite.

“There was a point around 12 or 13 when I kind of fell in love with the project,” says Coltrane. The director’s daughter, Lorelei Linklater, did not share his perspective as she asked her father if her character could die.”I couldn’t handle it,” she revealed.

Linklater did not tell the actors too much about what to do with their lives in the 51 weeks they were not shooting. Still, Ellar would call him when he was considering a haircut or getting a ring.

Linklater tried to incorporate in the story whatever was happening in the lives of his actors. He wondered what form of art Coltrane would pick, as his father is a musician.

In fact, he could have predicted that at age six or seven he would have ended up being a musician but Coltrane was more interested in visual arts. “I started taking pictures before Mason did,” he said.

Coltrane is grateful he was not allowed to see the footage during the 12 years as it helped him to avoid being very self-conscious. “It was a lot to deal with watching it two months ago and very cathartic and emotional and I can’t imagine how difficult it would have been at ten years old the to see that much of myself.”

For Lorelei it was “a really, really strange, really strange experience to watch that and honestly quite painful at times” and hard. “I was crying at least for a little while there”.

Producer Cathleen Sutherland paid tribute to Jonathan Sehring at IFC for agreeing to finance the film. They had a very small production budget they would receive annually. Linklater was that leap of faith was crucial and carried “a certain amount of optimism about the future, just that we would be here twelve years from now, that things will work out.”

A sequel isn’t on the cards as of now. “We haven’t talked about it, we’re still kind of recovering from this,” Linklater says, although it could be a future possibility: “Every movie sort of continues forever I guess like a line.”

Patricia Arquette said no other director could have made Boyhood. “This movie really only could’ve been made this way by Rick and his unique sensibility of filmmaking,” she said, adding that he has a really original and incredible voice in film — “I think that very few American directors have that”.​