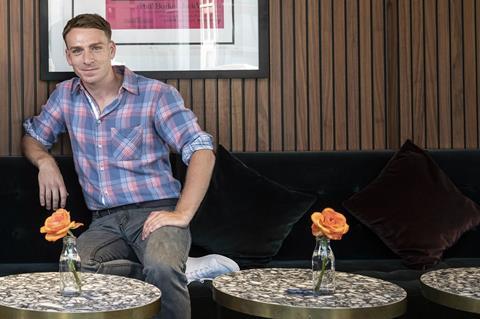 A graduate of the University of Oxford, where he majored in French and Portuguese, followed by three years at Guildhall School of Music & Drama, Edwin Thomas was “ready to go” when he launched his professional acting career in 2012. But barely a few months in, Thomas was forced to put his dreams on hold thanks to a perfect storm of injuries this sports-mad Londoner had acquired over the years. “I was one of those people that overworked their bodies to the nth degree, and I just kept on getting serious injury after serious injury,” says Thomas.

The gravity of his condition forced Thomas to step away from acting for four years, time he spent rehabilitating his body, training to be a teacher and, ultimately, tutoring French and history at a north London academy. “It was a real blow at first but then it became a good deviation for me,” he says. “It was important to be awakened to the world.”

In one of his first auditions post-injury, he landed the key role of Robbie Ross in Rupert Everett’s The Happy Prince, portraying the devoted companion that Everett’s self-destructive Oscar Wilde will not allow himself to fall for. “It’s the most inspirational thing I’ve ever done,” he says. “Rupert was surprised at how ready to go I was, but with the speed of this industry, I think that’s what people need nowadays.”

Thomas was inspired by his co-stars who, as well as Everett, included Colin Firth and Emily Watson. “They all trusted me and taught me different things,” says Thomas, who has also appeared in ITV’s Endeavour and Victoria. “Emily is the most incredible actress to work with. She always takes the scene to a deeper place. She goes right into the centre of who she is, and that’s the kind of work I want to do.”

Raised in Hackney, east London — which he still calls home — to actor parents, Thomas is fully recovered from his physical setbacks, and back to playing sports. While his time as an educator has sparked a desire to also pursue documentary filmmaking, it is his acting passions he is most eager to explore next. “The Happy Prince has given me the confidence that I can do it at this level.”