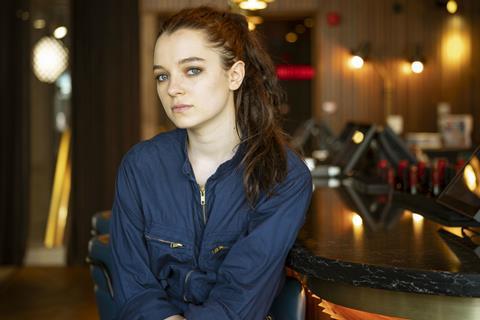 Despite growing up as the daughter of actors Samantha Morton and Charlie Creed-Miles, and appearing as Shirley Temple alongside her mother in Harmony Korine’s Mister Lonely (2007), Esme Creed-Miles did not set her heart on life as a performer. “I wasn’t really thinking about acting,” she admits. “I didn’t do drama at school.”

That all changed when her mother’s agent — now her own rep — Nicki van Gelder told Creed-Miles about Clio Barnard’s Dark River (2017), and the casting search to play Ruth Wilson’s central character as a teenage girl in flashback. Creed-Miles went through “a long audition process”, but eventually snagged the role. “And then I decided, this is kind of cool, and I’ll see where it takes me.”

Parts in low-budget UK indies Undercliffe (starring fellow 2018 Star of Tomorrow Laurie Kynaston) and Pond Life followed, and Creed-Miles abandoned her A-levels in favour of an art foundation course. Then came the opportunity to audition for Amazon’s Hanna, an eight-part TV series based on Joe Wright’s 2011 film, co-written by David Farr. The role on offer: Hanna, as portrayed in the original film by Saoirse Ronan.

Creed-Miles had seen the film and was excited by this opportunity. “It was surreal,” she says. “With jobs like that, you never think you’re going to get it. You have to have this thing of almost… you just have to not get freaked out. That’s one thing where my parents gave me that upper hand. They’ve experienced the rejection that actors get all the time. When you have that zen-ness about it, things maybe come your way a bit more.”

The role of Hanna required a lot of physical preparation (“fight training, stunt rehearsals, cardio, weight lifting, flexibility training, yoga”) for a shoot that ran from January to August this year. Speaking to Screen at the end of this exhausting schedule, however, Creed-Miles is still enthused for the future. “I’m going to try to make some short films and experiment — it’s something I’m interested in. But hopefully more exciting things are to come.”