Screen International has revealed its Stars of Tomorrow, spotlighting the hottest up-and-coming actors and filmmakers. 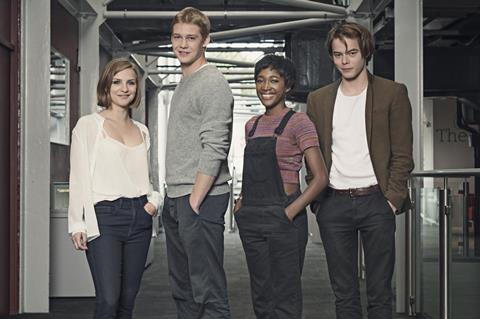 Now in its 12th year, the annual showcase spotlights up-and-coming actors, writers, directors and producers who will be making waves in the years to come.

This year marks a partnership with the BFI London Film Festival (Oct 7-18), which will present the Stars as part of its programme of events.

Halligan said: “It has been yet another exciting year for young British and Irish talent and yet another difficult selection in which I looked at around 400 valid candidates.  This may be the first time you encounter these names, but it certainly won’t be the last.

“It’s our first year where we are presenting the Stars of Tomorrow at the BFI London Film Festival and hopefully they will benefit from the greater exposure.

“Some of the young talent are here with films in the festival already and more will return. We at Screen wish them well as they sail off into super stardom and we look forward to watching them as they shine.

Matt Mueller, Editor of Screen International, added: “Now in its 12th year, Stars of Tomorrow continues to serve as a great showcase for young talent, and we are delighted to be presenting them for the first time at the BFI London Film Festival.

“The young actors, directors, writers and producers we have chosen are a real testament to the amazing talent that exists in the UK and Ireland. I have no doubt we will be hearing much more from our Class of 2015 in the years ahead.”

“New talent is the lifeblood of the creative industries and this year’s Stars are testament to the vibrancy of British film.”

This year’s Stars will be toasted at an event in London’s West End during the first weekend of the LFF.

It will be followed by an exclusive industry dinner hosted by British Council with support from the CSA to introduce the Stars to leading lights from the international film industry in town for the Festival, including US casting directors, European and US producers, international festival programmers, executives from prestigious filmmaker Labs and a selection of leading UK producers.

Adelayo Adedayo, actor, made her mark in ITV’s Some Girls and appeared in feature films including Gone Too Far! (LFF 2013) and Unlocked;

Aleem Khan, writer-director, shortlisted for a BAFTA award for his short Three Brothers is currently working on his first debut feature After Love;

Alex Lawther, actor, a UK Critics’ Circle young British performer of the year award-winner as the young Alan Turing in The Imitation Game which opened last year’s Festival, has landed his first lead in the independent feature Departure which screens in this year’s Festival Love strand;

Andy Brunskill, producer, has a number of projects in the works including Phone Book, for the BFI and Film4, Wondervogel to be directed by Nima Nourizadeh and the Girl at the Lion d’Or to be directed by Anand Tucker;

Barry Keoghan, actor, seen in the highly-acclaimed ’71 directed by Yann Demange (nominated in the First Feature competition at last year’s Festival),  Martin Radich’s Norfolk, the upcoming Trespass Against Us directed by Adam Smith, and is currently filming in Konstantin Bojanov’s I Want to be Like You;

Bebe Cave, actor, seen in Matteo Garrone’s Tale of Tales which premiered at Cannes, has played on stage opposite Helen Mirren in The Audience, and the BBC 1 drama Cider With Rosie just broadcast;

Ben Aston, director, was nominated for the Short Film Jury Prize at Sundance for Russian Roulette and is currently working on a feature John Moves In;

Ben Hardy, actor, will be seen opposite Michael Fassbender and Oscar Isaac in X-Men: Apocalyse;

Billy Howle, actor, was cast as the young Jim Broadbent in The Sense of an Ending, was the lead in Jack Thorne’s cult drama, Glue for E4 and appears opposite Saoirse Ronan and Annette Bening in The Seagull;

Brian Vernel, actor, seen this year in TV’s The Casual Vacancy, is fresh off the run of the Matthew Warchus directed Future Conditional at London’s Old Vic and set to lead the cast of Barbarians at the Young Vic later this year;

Charlie Heaton, actor, has just filmed opposite Naomi Watts in Shut In and next films with Winona Ryder in As a Friend;

Charlotte Spencer, actor, was BAFTA-nominated for her role in TV’s Glue, played Christine Keeler in the West End production of Stephen Ward and starred opposite George Mackay in Duane Hopkins’ BFI-supported Bypass  (LFF 2014) and which premiered in Venice 2014;

Dan Kokotajlo, writer-director, has two projects in development, Apostasy to be made under the iFeatures banner for Creative England, BBC Films and the BFI, and The Prefect;

Daniel Emmerson, producer, working in-house at DMC Films on projects including Assassin’s Creed for Justin Kurzel and Garagistas with BBC Films, as well as his own projects including the animated short Robot & Scarecrow, The Kitchen and Calm with Horses;

Ellie Bamber, actor, makes her film debut with Pride and Prejudice And Zombies and will be seen in the Tom Ford-directed Nocturnal Animals;

Emily Morgan, producer, is in-house with Soda Pictures after making the co-production Invention (Brazil-Canada-France-UK) which screens in the BFI London Film Festival this year;

Jess Barden, actor, won a major role in Yorgos Lanthimos’ The Lobster which is screening in the BFI London Film Festival as the Dare Gala, sponsored by Time Out and has appeared in Tamara Drewe, Hanna and Far From the Madding Crowd;

Joe Alwyn, actor, has landed his first screen role in Ang Lee’s Billy Lynn’s Halftime Walk opposite Kristen Stewart and has just wrapped on BBC Films’ The Sense of an Ending;

Jorn Threlfall, writer-director, won the Grand Jury Prize at Palm Springs with Over which screens in the new Short Film competition at  the BFI London Film Festival is working on his first feature script;

Joy Wilkinson, writer, made the 2014 Brit List for unproduced screenplays with the thriller Killer Résumé and the 1970s Manchester-set Enter the Dragons;

Marnie Dickens, writer, has seen her five-part BBC3 series Thirteen start shooting in August and is working on Forty Elephants, Kit and Nim, Seacole for Harbinger Pictures and a commission for the BBC;

Matthew Orton, writer, saw his first feature script Clean set up with Qwerty Films, is working on a spec script and has a commission for the political thriller Reason of State with Wildgaze Films;

Naomi Scott, singer, songwriter and actor, starred in Lemonade Mouth for Disney, Terra Nova for Fox TV and appears in the Chilean miners drama The 33 ;

Nicholas Galitzine, actor, drew rave reviews at the Berlin Film Festival this year for The Beat Beneath My Feet, and will be seen as the lead  in High Strung and Handsome Devils;

Nick Rowland, writer-director, has seen his shorts – Dancing in the Ashes, Out of Sight, Slap and Group B - nominated for several awards, has directed episodes of Cuffs for the BBC, and is now working on Calm with Horses with Daniel Emmerson, also a Star of Tomorrow;

Oscar Sharp, writer-director, scored a BAFTA nomination with The Karman Line starring Olivia Coleman (LFF 2014) , is attached to the Blacklist script Randle is Benign and is currently writing a script for Tobey Maguire and developing The Robber with producer Andy Brunskill;

Osy Ikhile, actor, appeared in Ron Howard’s In The Heart of the Sea, starred opposite Robert Sheehan in Jet Trash, with Rachel Hurd-Wood and Iain Glen in Beautiful Devils and most recently in David Yates’ Tarzan;

Rick Galazka, writer, topped the Brit List last year with Matinee Idol which is in pre-production with Rooks Next Entertainment.