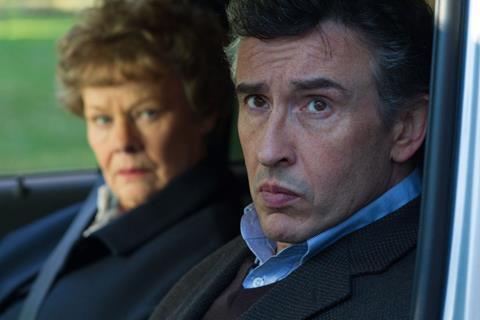 Steve Coogan isn’t laughing, or even cracking a smile. Not that the famed comedian and actor is being grumpy, just that he is extremely focused when talking about Philomena.

It is understandable: the lauded film is certainly his baby and it shows a new, more serious side to Coogan’s professional ambitions.

It all started when he read a Guardian article about Philomena Lee in 2009. “I found her story really moving and it just resonated with me,” Coogan says. “I wanted to a) break out of the sort of stuff I had been doing and b) do something that personally I just found satisfying.

“I found it depressing that there were not that many films around that were actually about anything. Films for an adult audience that had a point, a view about anything; that had the guts to say something sincere.”

Yes, the man who was also well known this summer for tucking his genitals between his legs in the hilarious Alan Partridge: Alpha Papa, wanted to make a film exploring more serious themes.

“Certainly in this country, cynicism seems to rule the day. It’s everyone’s default setting and it’s debilitating and it’s defeatist. It is almost the most avant-garde thing you can do today to talk about love, sincerely, and say something that you believe in, without inverted commas, without irony and to hold a point of view,” he says.

“Where are the films about reaffirming what makes us human? It made me angry that those things sort of disappeared; no studios make those films any more.”

Philomena certainly tackles some sincere subjects: it tells the true story of Philomena Lee, an Irish woman forced to give up her child in a Catholic-run Magdalene laundry in the 1950s. Decades later, with the help of author and journalist Martin Sixsmith, she sets out to find her son. Despite her hardships, she manages to forgive the Catholic church for separating her from her son all those decades before.

Coogan grew up in a Catholic household, which gave him a personal connection to understanding a woman’s faith. He also liked that the story could be told about the relationship between a woman of faith and a sceptical journalist. “I thought, ‘That’s a really interesting relationship,’ and I projected onto it things that I wanted to project onto it.”

Coogan’s production company Baby Cow, run with Henry Normal, secured the film rights to Sixsmith’s book The Lost Child Of Philomena Lee. “[Producer] Gabby Tana was really supportive and pushed me and gave me the confidence to do it. She said she would produce it with me,” he recalls of his relationship with Magnolia Mae Films’ Tana.

Tana brought the project to Christine Langan at BBC Films, who came on board and suggested Jeff Pope to write it with Coogan. “I wasn’t that keen on writing it at first, but I had an idea of the story,” Coogan recalls.

He wrote the script with Pope, whose credits include Pierrepoint and TV projects including City Lights and Mrs Biggs. Coogan was more the master of character and dialogue, and Pope guided the overall construct.

“We would argue about things, healthy arguments, and I would act out the scene in front of him and play out all the parts,” Coogan recalls.

The book was just the jumping off point — Coogan estimates only about 20% of the script is taken from the book. Coogan and Pope based more on their own interviews with Philomena and her daughter Jane, and author Sixsmith.

The story could have become schmaltz in the hands of other writers. “Whenever we came up with a mode that was familiar to us and is familiar in narrative as we were writing, we said ‘Right, let’s make sure we don’t do that thing because it is easy to do ABC of how to move people.’ And I don’t want to do that. I still want it to be restrained. When you repress the sentiments it gives it more power. All the way through we tried to sidestep those problems,” Coogan recalls.

“I don’t want to see one of those films that you feel is slightly manipulative and cynical, and is just trying to be emotional for its own sake,” he continues. “I tried to avoid that.”

Yet Coogan knows the structure doesn’t reinvent the wheel. “In some ways the film is quite conservative, familiar; it’s just a relationship, an odd-couple movie,” he adds.

Coogan and Pope spent two years writing the script, on and off, a day here or there or during a concentrated burst on a writing trip to the Lake District.

Coogan is accustomed to writing with a partner. “I’ve never written alone in the past 20 years. I’ve written most in comedy of course, always with someone else, always in a partnership. Now I’m too scared to write alone in a way. I would feel almost too lonely to write alone.”

He discovered Pope was an ideal writing partner and they are already collaborating on other projects. “Jeff is never precious. I would sometimes try to justify things, but Jeff was very workmanlike about it. He would say, ‘OK, what’s the problem, how can we change it, how can we make it better?’”

Philomena has deft touch with comedic elements. There are a few laugh-out-loud moments but nothing that insults the underlying pain of the drama. “I introduced comedy by default,” Coogan explains. “I thought it would make it less painful and there ended up being more comedy than I thought.

He continues: “I knew that I could use comedy to seduce people into thinking about things. Of course, making people laugh is all well and good, but not making people laugh for no reason. If you make people laugh when you try to get across a point of view, if they are laughing you’ve reeled them in a little bit. You’ve also made them challenge themselves.”

That mix of comedy and tragedy was successful — Coogan and Pope won the prize for best screenplay at the Venice Film Festival, where the film had its world premiere. Pathé, which also backed the film, released it in UK cinemas on November 1 (as of November 17, it has made $11.2m at the UK box office). The Weinstein Company releases in the US on November 22.

Faith in the project

Making a film about a religious woman like Philomena Lee appealed to Coogan.  “All that fascinated me, the idea that people who have a simple view of their life can often lead more contented lives than people who supposedly have all the answers. All that stuff I found was interesting,” he says. “It is very easy for a liberal intellectual to slag off a conservative institution like the church. It’s not particularly a radical brave thing to do in this day and age. The challenge is to recognise the doubt all people should have, including the enlightened intellectuals. They should doubt themselves and their own conservative views as well.”

He didn’t want a script that had the same tone as Peter Mullan’s The Magdalene Sisters (2002), which also told the bleak story of girls who had been mistreated in Catholic laundries. “That is an incredibly powerful film, but it was very unambiguous in its conclusions in a way that I think preaches to the converted,” he adds.

Langan called on Stephen Frears to read the script. Coogan recalls: “He loved it, as much as Stephen can love anything. In his slightly grumpy way he said, ‘Well, this is rather interesting.’ We had a conversation about it and it was by no means a polished thing when he looked at it. He really pressured us to give it more brevity. Get to the point. The best thing he brought to it and something I learned a lot from him is just clarity. Clarity of what it is you’re saying, what it is the scene is doing.”

Frears and Judi Dench had worked together before. “I was worried about Judi feeling comfortable. It was a big task, it’s the main role, it’s a big main starring role. It’s quite demanding. So I wanted her to be comfortable and happy. She had worked with Stephen before and loved him,” Coogan explains.

Frears and Coogan had a lot of back and forth as collaborators, with Frears frequently asking him to explain lines and scenes. “He would be very brutal about it and say, ‘What does this mean, what’s this about?’ We had to justify everything to him. We had a very good relationship. It was a robust, loving relationship.”

Coogan continues: “Stephen wasn’t precious; Stephen let me in the edit [room] and said, ‘If you think you can do it, let’s have a go.’ With a couple of tweaks I made, he said, ‘Yes, that’s better, you improved it.’ He is too old to have an ego. If you can make it better then fine, he doesn’t give a damn.”

Dench was keen to come on board. “She responded really positively, which made us feel we were very likely to get her,” Coogan recalls of her first read of the script.

Having an actress of such skill meant they could adjust the script, knowing Dench could bring life to scenes in a way no other actor could. “When Jeff and I wrote, we would create opportunities for her to act and just have a camera on her face in a situation where we, the audience, were alone with her. We wanted private moments with Philomena and the audience where no other character would be able to see, like those scenes with the television and the scenes where she looks through the gate, where she had last seen her child. The camera is really just about her face, it was exactly what we wanted.”

Coogan didn’t always plan on playing Martin Sixsmith, but as an actor he also knew this would be a great role. “I knew if I wasn’t producing it, I wouldn’t be offered this part. And I thought, ‘Well, I’ll have this part.’

“When Stephen came on board; one of the very first things I asked him was to keep a close eye on me. I had self-doubt about certain things in my performance, but there were parts where I thought, ‘I don’t need to be overly elaborate in this film, I know how to do this.’ I knew that if the camera was on me, I could use sort of comic expression and nuance which will read on camera.”

At one point, Coogan had thought about directing Philomena himself, and directing may be something he tries in the future if the right project comes along. But he admits to the occasional crisis of confidence in that department.

“It all seems very grown up to me. My background is more lower middle class, where you were sort of told not to be too aspirant, be realistic and modest in your aims. Then you won’t be disappointed. But what I started doing was I thought, ‘Well, actually maybe I can do this, maybe I can do that, maybe I could write something.’ You have to learn to be confident. But yeah, I am a bit scared about [directing], but maybe.”