Sundance Q&A: ‘Watcher’ director Chloe Okuno on her spiritual nod to ‘Rosemary’s Baby’ and the therapy of horror 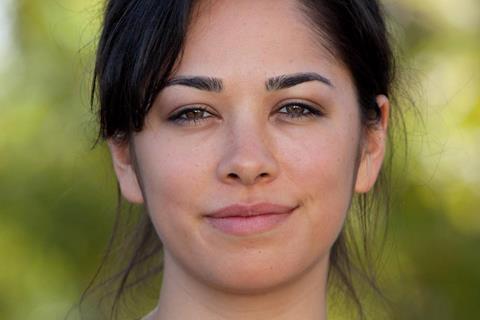 After directing a segment on V/H/S/94 and several noted shorts US genre filmmaker Chloe Okuno makes her feature directing debut on Watcher, in which Maika Monroe (It Follows) plays a woman who relocates with her husband to Romania and becomes convinced she is being followed, just as a serial killer stalks the city.

Los Angeles-based Okuno was hired to direct Zack Ford’s screenplay in 2017 after she submitted a 20-page presentation. She collaborated with Ford on “dozens” of passes of the script and things took off several years later when genre veteran Roy Lee (It, His House, the Ring films) and Spooky Pictures partner Steven Schneider agreed to produce and finance through their new deal with Image Nation Abu Dhabi.

How did the script evolve?
Julia and Francis move into an apartment and Julia becomes convinced that there’s this man watching her. The interesting thing was that in that original script it was more of a two-hander, split kind of evenly between [them] in terms of narrative point of view. When Roy Lee came onto the project he had the genius idea of just making it Julia’s story. He said spiritually let’s make this Rosemary’s Baby, let’s make it a story completely told from this woman’s eyes. And when we did that, I feel like a lot of things really fell into place in this wonderful way.

The original story was set in New York. Then the producers wanted to shoot in Romania. How did that influence the screenplay?
Bucharest unlocked a huge number of things. There were a lot of characters that didn’t really exist in previous iterations, like the character of Irena [played by Anea] who ultimately was very important. So something that was initially motivated by a practical necessity, rewriting it to take place in Romania, ended up unlocking all these great creative things, which I think have a profound impact on the story.

Julia is an interesting character whose vulnerabilities and doubts give way to an inner strength. How did you develop her arc?
I was really hyper aware of this because I wanted to be sure that she would understandably have frustrations and feel this fear and anger because of the situation that she finds herself in. But at the same time I’m looking at it from the perspective of what would I do in her situation. And I know that when you’re a woman and you want to convince people that what you’re saying is credible, you have to be very careful and modify your emotions and not give them any excuse to write you off as being hysterical. So while there is this intense level of fear she has to soften it for the benefit of people around her, which itself is actually very frustrating and probably heightens those feelings of anger and injustice. So it was about how to elevate the stakes without alienating people from her and making sure she’s doing things that still felt like you would make the same decisions if you were in her shoes.

What did you like about working with Maika Monroe, who broke out in 2014 Cannes Critics’ Week horror entry It Follows?
She was 19 or 20 when she did It Follows and I was such a fan. The depth of emotion that she brought to Watcher was just astounding. There were days when I stood back and felt shocked at what she was able to do and just conjure from seemingly nothing. That’s the power of really good actors. She’s phenomenal.

And Karl Glusman who plays her husband Francis does a good job of walking a fine line, too.
That’s it’s a very hard role because that character could be intensely unlikable. Karl did a good job of trying to bring some sympathy to a person who could be very unsympathetic. Karl also had a week basically to learn Romanian. Both Maika and Karl came on to the movie a week before we were set to start shooting and we put him together with a Romanian tutor. He really had to learn most of these lines phonetically and he managed to do it in about a week.

How did you find it shooting in Bucharest?
It has a pretty incredible infrastructure for making movies. Really good crew and the people we were working with, Abis Film, were really solid. And they were working sort of on an American system. So I think it was pretty easy for us to go shoot it there without, you know, without too much chaos or confusion because the crew was so strong.

What was it like being overseas as the industry was tentatively returning to production after the pandemic paused global shoots?
It was a tense time. It was pre-vaccines and we took every precaution we could in terms of testing and masking. We still had a couple of positive tests but luckily they were isolated, they didn’t spread, and we were able to keep going. We shot in March and April 2021 and the shoot initially was 28 days and it was extended to 29 because a day before she was due on set Madalina – who was fantastic and all the producers fell in love with her when she auditioned – got a positive Covid test result. We reshuffled the entirety of the schedule to accommodate her. We were waiting it out until the last minute for her to test negative and thank God we made it just under the wire, and she was able to come and obviously her performance is incredible.

What is it that draws you to genre?
It’s a way of talking about serious things that are important to me, but doing it in a fun, mischievous manner that allows people to feel what we’re trying to say without feeling like they’re being lectured to. Personally I grew up really loving filmmakers who mostly worked in genre, people like David Fincher, the Coen Brothers, John Carpenter and Roman Polanski. I was always drawn to those kinds of movies partially because I’m a very anxious person, so watching movies, where you’re sort of delving straight into the heart of my own personal fears and anxieties is weirdly very therapeutic; you’re watching the movie unfold in a way that is kind of controlled and giving yourself a chance to confront your fears.

As a genre-lover what was it like working with Roy Lee?
I adore Roy. He came on and was the person who made this happen because as often is the case with independent films, there were a few years when it wasn’t clear this movie was getting made because of the precarious nature of independent financing. Roy came on and believed in the script and he and [business partner] Steven Schneider’s new venture Spooky Pictures produces low-budget genre movies in partnership with Image Nation and this was the first movie in that slate. Roy’s such a titan of horror and like I said he had the truly brilliant idea to just 100% make this Julia’s movie in terms of the point of view and he really saw through to the heart of it. There’s a reason that he’s as successful as he is; his instincts are unparalleled.

Are you doing Rodney & Cheryl next?
I certainly hope it’s my next movie. It’s a brilliant script by this writer named Ian McDonald about a real-life serial killer named Rodney Alcaca who was very famous for being a bachelor [contestant] on The Dating Game in the 1970s. He was a horrific predator who was probably responsible for dozens of murders but he’s been prosecuted I believe for six. He recently died in prison. Anna Kendrick is attached to play the lead [as The Dating Game bachelorette Cheryl Bradshaw] and we’re just trying to make the project happen.