Estonia’s Ilmar Raag and Evelin Soosaar-Penttilä of Amrion Ltd. were the recipients of the latest Screen International Best Pitch Award at Tallinn’s Baltic Event for their film project ‘Erik Stoneheart’. 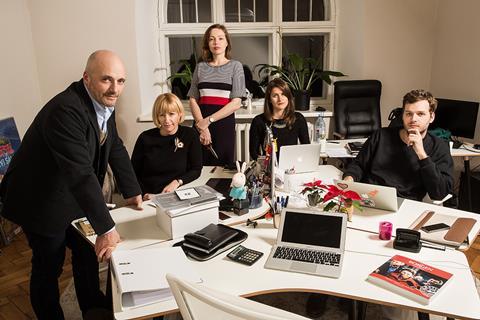 The screenplay by husband and wife writing team Andris Feldmanis and Livia Ulman tells the story of nine-year-old Erik who believes that he has a stone for a heart and meets the older Maria when his family move into an old inherited villa. Erik follows Maria when she sets off to look for her marine biologist mother who she believes has been kidnapped by pirates. They find themselves on a fantastical journey on a cruise boat to the In-Between-World, and Erik learns how hard it really is to wear a heart of stone.

Speaking exclusively to Screen about the film’s story, Raag says, “I remember that when I was a boy, I always hated the idea that miracles only happen in your dreams, and then you wake up and are back in reality. When I saw in the screenplay’s second draft that the magic was real, I decided that this film project is one for me.”

“In the story, there are some really difficult ethical questions posed,” Raag continues. “On the one hand, it is a story of first love and, on the other hand, it addresses the possibility of death. This might seem a really difficult subject for children but I remember in Harry Potter that he is always thinking about the death of his parents. So, you shouldn’t think that the film’s target group of 8-14 year olds isn’t ready to ask the crucial existential questions. And to show that life goes on.”

“Making a family film or a fantasy film is a real new departure for me,” says the versatile director whose previous features have included The Class, Une Estonienne à Paris, and I Won’t Come Back, although he notes that he had worked with older children in other films like his last feature I Won’t Come Back.

“If you have cast the children well, it is very rewarding to see what they create,” he says. “That’s the most enjoyable part of a shoot for me: watching what the actors are doing in front of the camera. This can often be a miracle.”

“The various layers to the story are what makes this film different from many other children’s films,” adds producer Soosaar-Penttilä, who joined Riina Sildos’ Amrion Ltd. last spring from Allfilm. “Much of it is metaphorical which makes it enjoyable for the grown-ups.”

Erik Stoneheart will be Raag’s fifth feature film and mark his fourth collaboration with Tallinn-based Amrion which began in 2007 with The Class, Estonia’s most successful film ever internationally with sales to 91 countries and 25 awards from 70 festivals.

Meetings round the clock

“We had very good experiences pitching at the Baltic Event co-production market, we had meetings scheduled for every slot available possible during the market,” she says. “We were really overwhelmed by the interest from sales agents, distributors and produces, and what we learned from our discussions was that there are many countries in Europe which don’t have a tradition of children going to see their own nationally produced live-action children’s films. There is a strong tradition for that in Estonia and the Nordic countries. A good example of this recently was the film The Secret Society Of Souptown which broke box-office records here [in Estonia].”

“I also spoke with some sales agents about the project at the AFM last November, and it is really clear that we won’t have any problem finding a sales agent for the film when it’s finished,” Soosaar-Penttilä explains. “The challenge will be, firstly, finding the best balance between the financing and the best talented cast and crew because the amount of money we can raise from Estonia is quite small compared to the budget we want to have.”

She says that she is interested in attracting partners from Germany, Holland, Luxembourg and Finland to come onboard the €2.5m project and notes that these territories “have a strong tradition in making films for children and are countries where dubbing is important and makes it easier for the co-producers to distribute the film.”

In addition, the film-makers will be looking internationally to find computer artists for the CGI effects and set designers to create a unique vision for the film.

Erik Stoneheart – which has just received a letter of commitment for production financing from the Estonian Film Institute – was first pitched at an international forum during the When East Meets West co-production market in Trieste two years ago.

A second pitching opportunity came when the project was selected for Cinekid’s Junior Co-production Market in Amsterdam last autumn shortly before the Baltic Event in Tallinn.

Soosaar-Penttilä is now set to be in Berlin next month to meet potential production partners for the family fantasy drama.