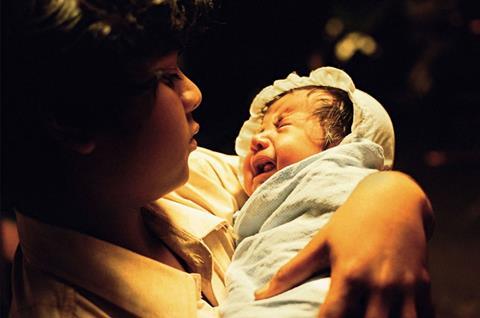 The global success of Slumdog Millionaire might help to create some curiosity about Thanks Maa, a sentimental melodrama set amongst Mumbai’s street children. Actor-turned-writer/director Irfan Kamal attempts a somewhat similar blend of urban fairytale and social commentary as Slumdog, but lacks the sure emotional touch and bravura filmmaking instincts that distinguished Danny Boyle’s Oscar-winner. Atmospheric scenes of street life in Mumbai and some engaging child performances might be sufficient to attract a slim audience in some territories, but contrived story developments and unsophisticated tugs at the heartstrings could make this a difficult sell.

Events are often heavy-handed and obvious, with a thundering musical score merely adding to the relentless tear-jerking of the final half hour

Kamal immediately establishes the canvas of his story with scenes capturing the daily lives of the many Indian children forced to survive on their wits. The wily scams, incorrigible wheeler dealing, dirt and poverty will be familiar to anyone who has ever visited a sprawling Indian city. The film finds its focus in the life of Municipality Ghatkopar (Shams), a twelve year-old boy with his own moral code and an idealised notion of motherhood. He still nurtures the belief that one day he may be reunited with his own mother.

Sent to reform school for his part in the theft of a wallet, Municipality escapes the clutches of a lecherous adult, but witnesses a two-day-old baby being abandoned on the school’s doorstep. He snatches the child and vows to return him to his mother regardless of the personal cost, and takes his parental responsibilities seriously – insisting, for example, that nobody smokes or swears around the baby.

The picaresque saga of his attempts to reunite mother and child proves to be a character-building exercise in which Municipality gains a more realistic view of the pressures on Indian mothers and we learn details of the staggering number of the country’s infants who are abandoned on a daily basis. The film closes with a montage of newspaper stories and heartfelt headlines underlining the fact that Thanks Maa may be fiction but it is a reflection of millions of true stories.

But Thanks Maa suffers from the fact that it seems to have taken some of its inspiration from a Dickens novel as we are asked to accept amazing coincidences and shock revelations in Municipality’s life. Events are often heavy-handed and obvious, with a thundering musical score merely adding to the relentless tear-jerking of the final half hour. Some editing to tighten the running time may be helpful.

The male adult characters of abusive guardians, worthless drunks, lecherous fathers and kindly priests are broadly sketched and the performances are mostly overstated. Kamal has much greater success in his work with the child actors who seem much more relaxed and spontaneous, especially Master Shams as Municipality. A wide-eyed charmer, he has a shining sincerity that makes the character hard to resist. His heart-and-soul commitment to the character is touching and lends the film a good part of its appeal.