“The landscape for horror is changing”: Natalie Erika James on debut feature ‘Relic’

The Australian filmmaker discusses the inspirations behind her debut horror feature, and her reaction on meeting the film’s animatronic puppet. 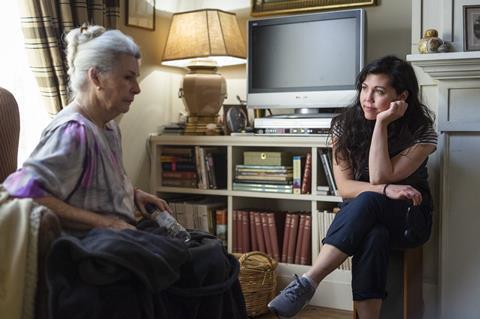 Based in Melbourne, Australia, Natalie Erika James has won plaudits for short films and music videos. A childhood penchant for “the darker fairy tales”, gothic fiction and horror with an injection of magic realism grew into a hunger for Asian and elevated horror films.

Find more information on the film, and access to an exclusive screening room for international distributors, visit www.relicscreening.biz.

How would you describe Relic?
It’s a tricky one. I’ve always called it a psychological horror. The drama is just as important as the horror. Psychological horror feels the most apt. It’s not a traditional, all-out horror film.

Does the film’s narrative come from a personal place?
My grandmother had Alzheimer’s [she died shortly after Relic finished post-production]. The writing of the film was quite cathartic for me. Writing the script [with co-writer Christian White] felt like one of those wonderful egoless relationships. It taught me so much in terms of collaboration and not being precious.

Is it dementia, is it a demon, is dementia a demon? Have you had experiences of either of those things?
It’s an astute observation – the idea of having to suspend the belief of whether or not something is supernatural, or whether what’s occurring to the grandmother is medical. That comes from a gothic horror tradition: in a lot of those stories, there is often a real-world explanation as much as a supernatural one. I’ve never believed in the supernatural or anything like that but recently I took a trip to Japan where I hallucinated a ghost so I believe in the power of your mind to play tricks on you. I love using the supernatural as a means of expression.

Do you think a genre film can help communicate emotional truths?
Maybe genre is a sacred space because it is so outside our reality but you can still feel intense emotions and grieve with an adrenaline rush at the same time. Fear is pretty primal. Horror allows you to capture the essence of a topic, an experience, an emotional truth as opposed to exploring it in, say, cinema verité where you try and capture the truth as is.

Where did your love of the horror genre come from?
It’s a few things. I was always drawn to darker fairy tales as a child, and from there I started reading a lot of gothic fiction, Stephen King, horror stories with magical realism elements. As a teen, I watched a lot of Asian horror. We had a family friend who used to be engaged to Hideo Nakata, who made Ring. She would always tell me stories about how Nakata’s horror was never just about something invading the home, it was really about externalised fears in the home. The beauty and emotion is just as important as the scares. That stuck with me.

How were you received as a young female filmmaker wanting to make a horror film?
I think the landscape is rapidly changing and pretty soon it won’t feel like there’s a difference; I know a lot of female filmmakers who make horror films. Historically horror has been a male-dominated space, but there has been an emphasis on reaching gender parity in the industry in the last five years in every genre. Perhaps audiences are hungrier for ‘elevated genre’ and the position of women on screen has changed as well – the extreme violence towards women that the horror genre used to provide an excuse for is maybe just not as interesting to audiences anymore.

Was having a female-led cast important to you?
Absolutely. I feel so lucky that all of them were willing to come on board. From an actress perspective, they really got behind me and the script. I felt 100% supported the whole time.

How tough is it shooting a horror film, emotionally and physically?
Bella [Heathcote, who plays Sam] cried for four days straight. It’s really physically and emotionally gruelling. Everyone was joking afterwards that they’d have to go do a comedy as a remedy.

Sound is extremely important in genre films. How did you approach the soundscape in Relic?
There’s a lot of crossover between sound design and score in this. That was quite conscious because I was interested in using a lot of diegetic sound — sounds that are from the world of the film rather than imposing orchestral music or something like that. The sound designer and composer both would record sound. My composer has a sound studio full of toys he used to create noises.

Was there one classic horror trope you wanted to have in your film?
It is so impressive in Asian horror how they create tension within the frame without the jump scares. I wanted to capture something like that, the slow creep of something coming towards you without the shock, the loud noise to make you physically frightened. Horror is so much about what you don’t see and that’s infinitely scarier than what you see on screen. I always appreciate a good sequence where the horror is building even though you can see it plainly on screen.

What was your favourite part of the shoot?
The film features an animatronic puppet and the first time I saw it move and saw how much emotion they were able to capture and how subtle the movements were, I just burst into tears of happiness and jumped around the room. I knew that however good the performances were, or the cinematography, the film’s ending was never going to work if it felt fake.

What are you working on now?
I’m writing a new project with Christian which is a Japanese folk horror, a la The Wicker Man and Rosemary’s Baby. It’s about motherhood, fear of motherhood, the loss of selfhood. We’re writing a second draft right now, working with the same producers who did Relic at Carver Films.

Film ConstellationFilm Constellation is a production, finance and sales company headquartered in London. The company builds on a track record for growing award-winning filmmaker brands, working with new and established talent, and fostering strong producer ties across both sides of the Atlantic. Since inception in 2016, the company has packaged, produced and sold over 20 commercially and critically acclaimed films and documentaries, premiering at A class festivals including Cannes, Venice, Toronto, Sundance and Berlin.